What if bros were safe? What if they weren't dangerous, sexist homophobes, but instead tender and kind – both to each other and to the women in their midst? What if packs of jovial, tank-topped "manly men" weren't something to steer clear of after dark? What if they were polite, considerate and believed God to be a woman? Would they be bros at all?

In giving us the answers, Magic Mike XXL conjures a very specific – and rare – kind of film fantasy, one where hard-bodied heterosexual males enjoy a genuine intimacy with each other, admire women for their feelings and intellect and have a nice time at a raucous drag bar without breaking into a brawl.

Gregory Jacobs' Magic Mike XXL is the superior follow-up to the cultishly popular 2012 original, a surprisingly gritty drama about male entertainers that renewed both our appreciation for the male form and Ginuwine's Pony.

When we reunite with "Magic" Mike Lane (Channing Tatum, basically playing himself) it's three years on and he's hung up his sparkly stripper thong for a pair of work gloves. His furniture business is "crushing it," but a welding-spark-showered dance solo in his workroom soon reveals he longs for his days on stage. When he gets an invite to go on the road with the boys for one last hurrah, he doesn't put up much of a fight.

Tarzan, Tobias, Ken, Big Dick Richie, and Mike all pile into Tito's yogurt van, and make the journey from Tampa to a Myrtle Beach stripper convention for a "tsunami of dollar bills" – one stocked with 900 enthusiastic female extras. Although his character is referenced, the audience quickly forgets Matthew McConaughey was ever part of this glitzy franchise, as the cast is certainly strong enough to hold its own without the Academy Award-winning actor.

Add-ons this time around include some A-list women: Jada Pinkett Smith as a sort of male stripper madam, Elizabeth Banks as a big-haired convention diva and Andie MacDowell as a charming southern divorcee.

Nothing much happens in Magic Mike XXL and I'm not sure that entirely matters. Other than a minor and mostly hilarious van accident, there is no central conflict and things unfold via a series of unstructured scenes around male bonding, woman charming and general gyrating.

The plot, or lack thereof, is actually evocative of Bring It On – or many a similar campy dance movie – with the typical montages and discussions of "maybe we should try a new routine this time around."

While this suggests light fluff, there's something deeper happening with the film's construction, which suggests the all-male writing and directing team wanted to make its seemingly shallow content deceptively subversive.

With cinematography from original director Steven Soderbergh, Magic Mike XXL is much more meditative than your average buddy comedy, and the unscripted feel gives the cast the freedom to exploit their subtle comedic talents. The boys divulge heartbreak around a campfire together, or chat about feelings and boy bands while palling around in the van.

Yet unlike most bro-road affairs, the jokes are not made at anyone's expense – instead there's a loving comradery between men who care about each other and the current status of their eyebrow grooming. While many filmic male friendships hinge on brute antagonism, no one here gets in a fistfight after a few too many, and any potential competitiveness is replaced with support. "You can tie your shoes and make some girl's entire year," Mike tells Richie, affectionately.

At times, though, Magic Mike XXL's mission to appeal to the needs and desires of women can feel heavy handed – I mean, Maya Angelou is quoted – but given the fact that not many movies even try, its hard to dismiss its earnestness.

When the crew ends up at a house full of older women, the movie hammers home its respectful, "women are queens" messaging, not ridiculing the over-40 female characters like the kind of butt-of-the-joke cougars that are all too common on screen. Women of all sizes and ages are celebrated, and the overall tone is one of enthusiastic consent. (It's also amazing that a film can be so hypersexual without any actual on-screen sex.)

It may be a meandering road trip movie about a group of emotive performers who fancy themselves therapists, but Magic Mike XXL is an ingenious revelation of a film – it's designed for women yet steered by all-male leads, tapping into a best guess at women's desires in a self-aware, sincere, entirely deliberate way.

As Magic Mike XXL closes with fireworks and Tatum's winning smile, the film is obviously satisfied that it has overturned some mired tropes – and frankly, so are we. 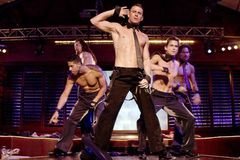