Blessed with the looks of a goddess and the wry sensibility of a smart-ass comedian, actress and filmmaker Lake Bell is the perfect contemporary romantic-comedy heroine. Beyond her natural magnetism, Bell has a hip, ironic, detached persona that implicitly comments on the idiocies and machinations of the romantic comedies she sometimes finds herself in.

Bell wrote and directed a star-making role for herself as a strong, neurotic woman in the testosterone-poisoned realm of voice-over acting in In a World… and has lined up her next directorial gig, but in the meantime her talent is being egregiously wasted in the mindless comedy of deception, Man Up.

Convoluted even by the exceedingly lenient standards of the high-concept romantic comedy, Man Up casts the radiant Bell as Nancy, a 34-year-old journalist whose predilection for blunt talk and brassy humour have rendered her single and unattached deep into her 30s, and within the context of movies like this, veritably a spinster-in-training.

One day this inexplicably single young woman meets a woman on a train and, through a series of complications too stupid to recount, ends up pretending to be the blind date of Jack, a 40-year-old man in the midst of a difficult divorce, played by Simon Pegg, whose films outside of his films with Edgar Wright and the Star Trek and Mission: Impossible series suggest that a quorum of John Travolta, Nicolas Cage and John Cusack choose his roles for him.

Man Up dreams up some pretty ridiculous reasons a woman who looks and acts like Bell would need to perpetrate an elaborate ruse in order to get a reasonably attractive, appealing older man with a boring job to consider her as a romantic partner. But the idiot script doesn't stop there, instead throwing in a stalker Nancy unwisely spills her big secret to, and who then uses this furtive knowledge to try to extort Nancy for sexual favours in a bathroom, a plot development that belongs in a much darker, sleazier movie than this inane fluff.

Just when it seems that the filmmakers have reached their quota of hopelessly strained developments, the fledgling couple runs into Jack's scowling, sour, soon-to-be-ex-wife and her new boyfriend – and Jack, who discovers his date's secret halfway through the film, decides to put Nancy's gift for deception and role-playing to good use by having her pretend to be his sexually voracious new girlfriend.

Bell and Pegg have a nice chemistry in the few moments when they're allowed to be sweet and open with each other, and not just pawns in a giant game of chess everyone loses. Yet Bell and Pegg are utterly defeated by a screenplay that favours plot over characterization to an almost surreal, parodic degree.

In the dishonorable tradition of painfully convoluted romantic comedies, Man Up introduces two delightful lovers clearly made for each other by God herself, then hurls artificial roadblocks to their happiness, like Donkey Kong tossing barrels at Mario as he tries to man-up and save his princess. In a related development, the filmmakers smartly cast two of the most charming, appealing actors alive, then did everything in their power to make it difficult for them to be charming.

After all, who would want to see these actors be adorable and flirtatious with each other for 88 minutes or so when they could spend an equivalent amount of time watching them be overmatched human marionettes whose strings are being sadistically yanked in every direction by puppeteers interested in them only as vehicles to drive a phenomenally stupid plot forward?

Film Review
The Night Before: A reminder of how many funny people Seth Rogen can cram into one film
November 20, 2015 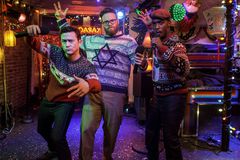 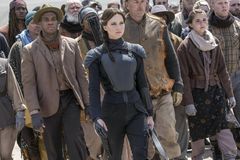 Film Review
Secret in Their Eyes: An underdone remake of an Oscar winning thriller
November 20, 2015 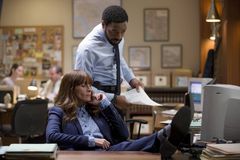