Toward the end of Maudie, a cramped old aunt enviously concedes that Maud Lewis is probably the only happy member of her family. Disabled since childhood, abandoned by her relatives after her parents' death, forced to take work as a housekeeper to an impoverished fish peddler and now living out her life in his one-room shack, Maud cheerfully agrees.

Maudie has to walk a fine line as it tells a story of art rising from adversity. That this Canadian-Irish biopic makes the story of the beloved Nova Scotia folk artist genuinely touching rather than merely sentimental is testament to the delicate hand of Irish director Aisling Walsh, a carefully judged script by Canadian writer Sherry White and two fine performances, from Sally Hawkins as the shyly determined Maud and Ethan Hawke as her reclusive husband, Everett. The story of her artistic success runs up against a certain dramatic inevitability by its third act and the distinctive Newfoundland setting is really too gorgeously rugged and sparsely populated to successfully pass as Nova Scotia, even in the 1930s, but the heart and mind of Maudie are always in the right place.

One of the director's most important decisions is to make little of Maud's significant disabilities, which the script does not name apart from one belated reference to arthritis.

(Lewis is believed to have suffered from juvenile arthritis as a small child, a condition that worsened considerably when she got older, although some accounts also describe her as born with deformities.)

Here, she is treated by her uncaring brother and put-upon aunt as though she were mentally and physically incompetent, but Hawkins offers only a lopsided posture, limping walk and tucked chin – along with a big-hearted performance that captures a personality in which naiveté and diffidence mix charmingly with optimism and grit. Another delicate issue is the artist's relationship with Everett, the irascible middle-aged bachelor who advertises for a maid, finds Maud on his doorstep and grudgingly makes room for her in his shack, in his bed and in his life.

Hawke's precise performance manages to make the plight of an illiterate, insecure and occasionally abusive man deeply sympathetic, inducing pity rather than anger.

Between the two of them, Hawke and Hawkins turn the film into a cheering story of two outcasts who stumble toward their own kind of love, gradually learning to comfort and care for each other.

And last but not least, what this film does well is reveal the powerful role that art played for Maud, without trying to make any exaggerated claims for her cheery and almost childlike images of oxen pulling plows, Everett chopping wood or chickens pecking in the yard that she created on old boards using leftover house paints.

Maudie delivers a strong sense of what art-making means to the outsider artist, of the way in which painting relaxed and comforted Maud, allowing her to escape both social ostracization and daily cares.

As the camera focuses in on her narrow perspective – "I love a window … the whole of life already framed" – and her gnarled hands, you sense the injured child retreating into a safe place.

Yes, this fine balance is pushing up against sentimentality by the time we reach a brief estrangement in the sometimes prickly relationship between Maud and Everett, and there's not much story left to tell once the artist eventually achieves professional recognition.

Some accounts suggest Lewis's late-life emphysema was caused by inhaling paint fumes and wood smoke in that tiny cabin, making her death at 67 in 1970 tragically preventable.

Typically, Walsh and White prefer the simpler and, in the context of those times, less painful explanation that Maud just smoked too much.

Whether or not poverty eventually killed Maud Lewis, Maudie is a convincing testament to an impressively idiosyncratic spirit who rose above all circumstances. 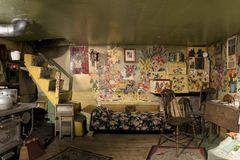 In Maudie, Sally Hawkins embraces the art and life of Nova Scotia artist Maud Lewis
April 12, 2017
Review
In A Quiet Passion, the life of reclusive poet Emily Dickinson is explored
April 14, 2017
Follow Kate Taylor on Twitter @thatkatetaylor
Report an error Editorial code of conduct
Due to technical reasons, we have temporarily removed commenting from our articles. We hope to have this fixed soon. Thank you for your patience. If you are looking to give feedback on our new site, please send it along to feedback@globeandmail.com. If you want to write a letter to the editor, please forward to letters@globeandmail.com.
Comments