Her imprisoned husband is serving an eight-year sentence, but Ruby is no less confined. His stay behind bars has put her life on hold. Every weekend she commutes two hours to see him in jail – on the bus with the other wives, in the visiting room exchanging guarded words. A soft-spoken con, Derek urges her to move on: "Don't stop for me." She shakes her head and vows, "You are me." Yes, Ruby stands by her man, yet the film that follows is much more than a love story. Made by a black American woman, about a black American woman, it's a study of a culture where the matriarchs are strong by necessity and trapped by circumstance – adrift in the middle of nowhere.

Writer/director Ava DuVernay keeps her marooned protagonist on camera almost constantly and, initially at least, leaves the details deliberately obscured. We don't know how Ruby met her husband, or what led to his imprisonment. Maybe he was falsely accused, just another black male victimized by his environment. Or maybe not. But her love is sure, along with her capacity for sacrifice – she abandoned her doctor ambitions to become a nurse, and now works double shifts to pay down Derek's accumulated legal bills. Her loyalty is commendable. Or perhaps misguided.

DuVernay introduces us to this world of uncertainty, then expands the focus to include two other women: Ruby's mother (the superb Lorraine Toussaint), the sharp-tongued voice of reason tinged with cynicism; and Ruby's younger sister, raising a son alone. In both cases, their men are absent, permanently gone, which might explain Ruby's devotion to her man – just a bus ride away, safe behind bars in a place that rewards "good behaviour." Parole is possible, early release beckons, her dedication is not misplaced, her amour is not fou. So she continuously tells herself.

In the hands of a more commercial director – Tyler Perry is an obvious comparison – all this would be played for cheap melodrama and easy moralizing, especially when Derek's prison behaviour turns violent and when love forms a triangle with the appearance of the good guy, a kindly bus driver (David Oyelowo) who offers Ruby a supportive alternative. But DuVernay (who earned the directing laurels at Sundance last year) refuses to go down that path. This isn't an Oprah-esque exercise in consciousness-raising. Instead, the dialogue remains taut, the choices stay hard, redemption proves elusive and blame widespread.

Two scenes in particular reveal Ruby's divided and contradictory nature. Admirably, she flashes her strong determination in a law office, where good lawyers are pricey and the judicial system is a balancing act between cash-up-front and justice-down-the-road. But later, a flashback to the scene of Derek's original crime sheds light on the source of her original sin. Ruby (portrayed by Emayatzy Corinealdi with a beguiling mix of stolid purpose and underlying frailty) was actively complicit in choosing a flawed man to love against her better judgment. And now she's equally complicit in not choosing a good man to love despite her better judgment. Once again, the woman is marooned – this time in the grey zone between the heart and the head.

Not everything is that honest. Sometimes, the quiet lyricism of DuVernay's direction seems at odds with the grittiness of the subject matter, like poetry force-fed into prose. Still, there's no compromise at the climax, where Ruby finds herself at another stop awaiting another bus. Maybe this one is bound in a different direction, away from bad choices to better, away from nowhere to somewhere. Or maybe not. 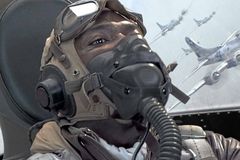