So it's not a stretch that Gillespie (Lars and the Real Girl, Fright Night) would land behind the camera for the kind of film that succeeds or fails on its ability to sell hard a number of things – hope, dreams and inspiration packaged as blood, sweat and tears.

Million Dollar Arm is based on the true story of two teenage boys from Lucknow, India, Dinesh Patel (Madhur Mittal) and Rinku Singh (Suraj Sharma), and J.B. Bernstein, the sports agent who tries to turn them into major league pitchers in the most postmodern way possible.

Jon Hamm, who has been television's top leading man for more than six seasons as Don Draper on Mad Men, is in his first leading role on the big screen. He is one star athlete away from losing his livelihood and the splendid lifestyle it bankrolls (Porsche, impeccable bachelor crib, fetching suits and an endless parade of dumb models smart enough to slip out the front door at dawn.)

The movie opens with Bernstein, desperate after watching his only potential signing, a flaky NFL linebacker named Popo, bolting for a rival agency when he can't deliver a million-dollar signing bonus.

One night, while wallowing on his black leather sofa with a bottle of beer, he becomes transfixed channel surfing between Britain's Got Talent hopeful Susan Boyle and her show-stopper I Dreamed A Dream and an Indian cricket match. Inspiration strikes. Why not foist a talent search on an enormous, untapped market of young men who can throw a ball?

A Hollywood take on sports, at least in Disney's hands, only succeeds if we are made to believe that anything is possible, that dreams are realized, that adversity makes us stronger, that any and all odds can be overcome. Baseball, because it is historically seen as the most romantic of the sports, has proven the toughest challenge for filmmakers. Purists are finicky. The game has inspired some of the best sports movies and some of the worst. Scripts can be saccharine, full of clichés. Sort of like reality talent shows. A mash-up seemed natural. But this is no more a film about baseball than it is a film about cricket.

Bernstein, with the help of his assistant Aash (Aasif Mandvi) concocts a contest that will discover baseball's next great pitcher and save his career. Travelling across India, with a narcoleptic major league scout (played for delight by Alan Arkin) is a nightmare. All the predictable problems – noise, pollution, crowds, dysentery – ensue. What also occurs, more slowly, is the realization that cricket bowlers and baseball pitchers aren't the same thing. None of the kids that come out – and the contest is mobbed everywhere they go – can throw over 40 mph (64 km/h) or within a mile of the strike zone.

Then Bernstein meets Patel and Singh, who, despite their odd mechanics, can throw a perfect strike more than 83 mph. They say farewell to their families and head to Los Angeles with Bernstein, where they have six months to prepare for a major league tryout.

After one unwise, unsupervised night in a hotel, Bernstein moves the boys into his place. They are befriended by his neighbour Brenda (Lake Bell), a medical student who becomes a den mother to the boys and romantic foil to Bernstein.

It's not until they land in L.A. that Bernstein learns that both boys hate cricket – one is a javelin thrower and the other plays field hockey. He takes them to USC's baseball stadium to work with the team, and watches them become acquainted with a baseball mitt. Singh has a Karate Kid-meets-pink-flamingo windup. Oh, and they can't find the side of a barn with a baseball.

The boys are homesick. Bernstein ignores them while he tries to reclaim his L.A. life. An eventual major league tryout in a strip mall is a disaster.

"If they are your last best shot, why don't you pay more attention to them?" Brenda asks J.B. "You just need to commit."

And there it is in five words. Redemption begins in earnest. Bernstein trades his Porsche for a white mini-van, starts cooking the kids breakfast, does their laundry, watches them practice. They start to perform better. Brenda and J.B. start to fall for each other. J.B. hustles another tryout for the boys, which turns out much better.

The role, while hardly a stretch for Hamm's acting ability, doesn't challenge him either. Charming and easy on the senses, Hamm seems comfortable, and maybe that's what he was looking for in a big-screen debut.

It doesn't fail, but it never actually reaches its potential. This is more the fault of the script, written by Tom McCarthy (The Station Agent) than the actor.

Hamm and Bell are likeable actors with terrific timing. The location shots in Mumbai are beautiful, chaotic and jarring. The script is amusing.

Hamm recently told an interviewer that acting and athletics have no measure in common; that you can either hit a curveball or you can't, but that acting is in the eye of the beholder. Hamm, who plays catcher in a Hollywood men's league, understands the game, and is good but not great. It is how his role feels: good but not great, through no fault of his own.

Disney has made a few sports films that tug right on the emotions – The Rookie, Miracle, Remember the Titans – and Million Dollar Arm is an easy addition to the canon.

Sports, at their best, explore the soar and crush of human endeavour. It's what lifts fans from their seats and evokes cheers and tears. In real life it can be enough to embrace your team through its ups and downs. But in a film, where the camera hones in on character, those characters must come alive. And the best ones in the film – Patel and Singh – never quite reach their potential that way.

The movie is about expectations, the ones we have for ourselves and those we impose on others, life lessons learned better late than never. It's a soft and sweet story, a small film about big, honest ideas, about dreaming a dream. It's charming and inspirational.

Where it falls short is that the film's most compelling characters – Patel and Singh – are faintly unfinished and underexplored. It may well have worked better as pure documentary, and it will send many moviegoers on a mission to Google, where they will learn more about the real stars of the picture.

Shawna Richer is Sports Editor of The Globe and Mail. 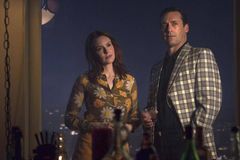