The Minions, those gibbering little ovoid, goggle-wearing, denim-clad creatures that helped the arch-villian Gru (Steve Carell) in Despicable Me and Despicable Me 2, are back with their own feature movie.

Set in London of the late sixties, this disjointed new prequel suggests the little blue and yellow "helpers" may have been inspired by amphetamines. The three non-human stars are leader Kevin, babyish Bob and the ukulele-toting Stuart, all voiced by co-director Pierre Coffin, in a mix of Spanish, Italian and French and occasionally English-sounding gibberish.

To get some idea of the pace of the movie, the intro covers the entire length of planetary life, from the primordial soup to the recent past, in the first few minutes.

Narrator Geoffrey Rush tells how Minions have been oriented toward serving evil masters for millennia, but given the Minion gift for mayhem, those leaders usually come to a bad end. The list includes a Tyrannosaurus rex, a pharaoh, Count Dracula and Napoleon, who somehow drives them to an Antarctic cave, where the Minion species is in danger of extinction from the lack of stimulating mischief.

Jump to 1968, and three brave Minions end up in New York and, in a series of slapstick visual gags, almost leave the city upended. From this point, the soundtrack tunes in to a constant series of classic rock golden oldies, kicked off by the Rolling Stones' 19th Nervous Breakdown.

After discovering the phenomenon of television, the Minions learn about the Villain-Con taking place in Orlando, and they head off in search of a new evil master. En route they hitch a ride with a chatty American family called the Nelsons (an Ozzie & Harriet reference?). The parents, voiced by Michael Keaton and Allison Janney, turn out to be Bonnie and Clyde-style bank robbers. The Nelsons, too, are headed to Villain-Con, and excited to see the convention's inspirational headliner, Scarlet Overkill (Sandra Bullock), a motivational speaker with megalomaniacal tendencies.

In a jiffy, the Minions have signed up as Scarlet's personal aides, and together they head off to London, where Scarlet and her too-groovy husband, inventor Herb (Jon Hamm), plan to steal the crown of Queen Elizabeth. The Queen (voiced by Jennifer Saunders) is portrayed as a slightly petulant diva but, over all, a pretty nice girl.

With its episodic stream of slapstick gags, Minions has moments of piquant absurdity, but mostly its shrill-but-cutesy anarchy works as a visual sugar rush for the preschool set. At the same time, the references to the Beatles, Japanese monster movies and the musical Hair seem aimed not at parents but at babysitting grandparents, who can nod along to Donovan's Mellow Yellow and not worry too much about when they lost the plot.

Editor's note: Scarlet Overkill's name was misspelled in the original version of this article. 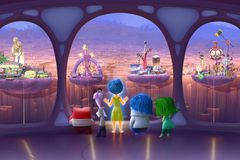 John Doyle: What Sandra Bullock needs is a job in television
July 7, 2015 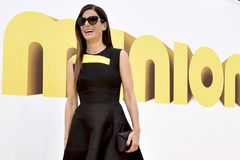 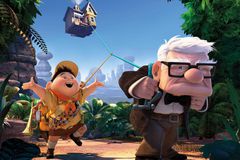