If you've ever found your eye wandering while driving down a highway, you've likely spotted a bumper sticker displaying the words, "Jesus is coming. Look busy." Studio executives must do a lot of driving, too, because Hollywood has taken that message to heart, churning out an impressive number of faith-based films over the past few years.

You know the type: treacly, prayer-driven affairs such as Facing the Giants, When the Game Stands Tall, War Room and To Save a Life – movies designed to look like mainstream dramas, comedies and romances, but with copious scenes set inside churches, and always at least one character finding themselves redeemed through the power of religion, specifically evangelical Christianity.

Of course, Hollywood's embrace of the genre is likely more financial than devotional. If something like 2014's Heaven Is for Real can cost only $12-million (U.S.) but go on to earn $101.3-million, then I'd imagine producers have come-to-Jesus moments every Monday morning once the box office figures roll in.

To add to these religious awakenings is Miracles from Heaven, the latest offering from Sony's Affirm Films label, which specializes in producing movies that preach to the choir. Yet this new film, strategically opening just a week and a half before Easter, is a slightly more curious product to come out of the faith-based film machine.

Basically, Miracles from Heaven boasts a genuine movie star in Jennifer Garner, easily the highest-profile performer to latch on to the genre (sorry, Nicolas "Left Behind" Cage and Greg "Heaven Is for Real" Kinnear). Why, exactly, Garner decided to star in the film is a matter between the actress and her god, but let's hope there was a sizable paycheque involved, because Miracles from Heaven is mostly an embarrassment.

The film is competently shot by director Patricia Riggen and decently acted by Garner, as far as melodramas go. But it contains such an insulting message – essentially, everything will be fine as long as you pray, pray hard and pray specifically to Jesus Christ – and is delivered in such a forced manner that it undermines any semblance of cinematic art or entertainment. This is not a film, at least as most filmmakers and audiences imagine the form. This is proselytizing, pure and simple.

Adapted from Christy Beam's memoir, the film follows the Texan mother (Garner) as she deals with the debilitating health of young daughter Anna, who suffers from a severe digestive disorder. After getting the cold shoulder from the medical establishment (save one kindly doctor in Boston), Anna finds herself cured after enduring a near-death experience. Doctors are amazed. The family's pastor suggests it's a miracle from above. And the little girl herself recounts a visit to heaven during her traumatic experience, complete with imagery seemingly left from What Dreams May Come's cutting-room floor.

And that's about it. Audiences are given the choice to either accept that, yes, the power of Christian faith healed this little girl. Or … well, I guess you just hate seeing healthy little girls, don't you? There's little room for middle ground. Even one of the film's non-believer characters – a journalist, naturally – comes around to the power of the Almighty.

The movie's insulting ethos is laid bare with a third-act quote from the little girl playing Anna (an actress whose name I won't mention here since her career is far too new to be forever associated with this film). Asked by Christy whether people will believe her tale, Anna replies: "Not everyone's going to believe, and that's all right. They'll get there when they get there."

Yes, the filmmakers suggest, you don't have to leave the theatre embracing the power of God. But eventually, you'll come around. They're praying that you do.

Film Review
The Brothers Grimsby: At times a genuine riot, but better off without the gun fights
March 11, 2016 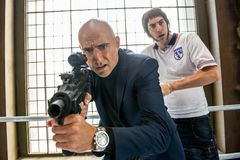 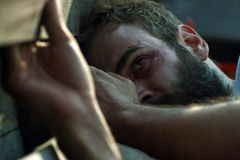