The World's Most Interesting Man lives vicariously through himself. Most of us, though, exist more mundanely. So we feed off others, watching reality television here and rooting for sports figures there. Voyeurism and second-hand excitement.

Nerve is a slick, thrill-a-minute movie ride based on a young-adult novel by Jeanne Ryan. In it, youthful, amateur daredevils – "players" – are goaded by online inciters – "watchers" – into performing feats of escalating scariness. The New York-set film has a near-future quality to it, but for all intents and purposes, Nerve takes place in the present day. Remember when kids used to play chicken on country roads with tractors? Ooh-wee, Marie, it's a different kind of footloose out there now.

Venus (Vee) Delmonico is a straight-arrow high school senior in Staten Island. A nerdy photographer, she wants to go to art school in California, but her single mother – a wonderfully fretting Juliette Lewis – can't afford the ticket. Vee is repressed and vaguely awkward, even though she's unmistakably beautiful (played by Emma Roberts, who stars in the Fox horror-comedy series Scream Queens).

Vee's pal is Sydney, a sassy extrovert who shocks a pep rally by flashing some bare cheerleader butt. Turns out she did it as a challenge, and was awarded a monetary prize for doing so.

The game is called Nerve, and it's basically Truth or Dare without the truth, with a little Fight Club secrecy thrown in. It's based online – in the dark end of the Net – with smartphone cameras documenting the high jinks.

Nerve comes from Henry Joost and Ariel Schulman, the directing team behind Catfish, a 2010 documentary about a Facebook-based romance. Catfish can be seen as a cautionary tale about living your emotional life on the Web. With Nerve, we get a taste of how online living exposes people to manipulation.

Vee, looking to step out from her friend Sydney's shadow and her mother's doting protection, decides to be a player and not a watcher. Her first dare is to kiss a stranger in a diner, and wouldn't you know it, there's a devil-may-care stud reading a book in one of the booths. She kisses him, with more enthusiasm than anyone expected.

The recipient of the smooch is Ian, played with verve and a brush cut by Dave Franco (who's probably a little too old to be messing around with high schoolers, but what the hey). Franco's character is reading Virginia Woolf's To the Lighthouse, which not coincidentally is Vee's fave novel. The Internet knows that; the relationship is a set-up.

Things get crazier from there, as Vee, Ian and others move from wacky stunts to much riskier dares, with the monetary incentives rising exponentially. An online audience watches with Hunger Games dark glee as the unlikely couple run around without their clothes on or drives a motorcycle blindfolded. (It's unintentionally hilarious when Vee undoes her pony tail and shakes out her bouncy mane – a hair-based show of "I'm breaking out of my shell.")

Nerve looks fabulous and the pace is evenly adrenalized, which makes up for clichéd characters, a concocted premise and commentary that is a bit on the nose: That we are cyberprisoners, and that keyboard bravery is fake when protected by Internet anonymity.

At its best, the film entertainingly explores the strange charisma of online voyeurism. And for parents wondering what their footloose children are up to, it may, one might say, touch a nerve.

Film Review
Life, Animated is heartwarming and heartbreaking all at once
July 22, 2016 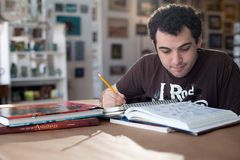 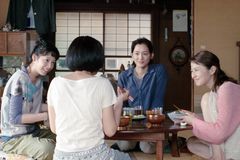 Film Review
Refreshing horror flick Lights Out has more to it than jump-scares
July 22, 2016 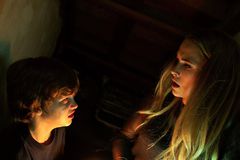