In the luridly entertaining, faux-serious Nightcrawler, Jake Gyllenhaal has starved himself down to look lean and bug-eyed as a sociopathic ambulance-chasing videographer, gleaning gory images from the streets of Los Angeles for the delectation of the evening news. And, by proxy, it's a movie for the pleasure of movie audiences pretending to be shocked by a story of ghoulish media.

The low-key opening sees stray dog Lou Bloom (Gyllenhaal) as a literal scavenger, stealing scrap metal to sell, and sometimes resorting to violence. One day he comes across a fiery car crash and sees a video crew at work. A swaggering cameraman (Bill Paxton) tells him it will be on the morning news because (imaginary drum roll) "if it bleeds it leads." A wide-eyed Lou scents his true vocation in life.

With a pawn-shop camcorder and a police radio, he begins, clumsily at first, inserting his lens into crime scenes, gleaning material for the nightly news. He soon finds a collaborator in callous, middle-aged TV news director Nina (Rene Russo), working to boost ratings for a struggling affiliate. He shows her some shaky footage of a carjacking. Lou's technique may be crude but he's promisingly unscrupulous, so she gives him some editorial guidance. Audiences want "urban crime creeping into the suburbs," carjackings, home invasions.

"Think of our newscast as a screaming woman running down the street with her throat cut," she suggests.

Not only does that sound exceptionally physically challenging, it's also a distinctly screenwriterish kind of dialogue. Nightcrawler is the directorial debut of screenwriter Dan Gilroy (The Bourne Legacy), and it's framed as a movie about the media, with some of the purplish, strident dialogue of Billy Wilder's Ace in the Hole (1951) or Sidney Lumet's Network.

In a world where beheadings are available online, and one good celebrity scandal matters more than any number of home invasions, Nightcrawler feels quaint, like a comforting murder mystery of lust and violence in a more delicate era.

Yet the movie is entirely watchable, thanks to the bright wide-screen, neo-noir night scenes (courtesy of Paul Thomas Anderson's cinematographer Robert Elswit) and another whacked-out, obsessive performance from Gyllenhaal, following his work in Prisoners and Enemy. His performance often feels like a triumph of acting over material.

Nightcrawler is at its best as a black comedy, in which Lou's contradictions are part of the absurdity. On one side, Lou's a remarkably quick study who not only knows what kind of images TV wants, but quickly learns the different markets, and how to spot Nina's vulnerability. At the same time, he's a socially clueless character, like Robert De Niro's Rupert Pupkin in The King of Comedy, given to quoting inane, optimistic affirmations and business guides like an alien who has arrived on Earth and is experimenting with operating manuals.

One of Lou's bright business ideas is to hire an "intern," a homeless man named Rick (Riz Ahmed, offering wonderfully slow-motion reactions to Gyllenhaal's agitated pronouncements). Rick helps Lou navigate as they drive around in Lou's new Dodge Challenger, doing anything necessary to beat his rival (Paxton) to the crime scene, and to get there before the police. And finally, to improve the crime scene itself with auteurish flourishes, consistent with Lou's business plan to "expand to the next level."

All this is presumably intended to feel breathtakingly cynical, and at the same time designed to encourage viewers to connect the dots between sensational news gathering and the business of violent entertainment, of which Nightcrawler is a part. The trouble is that absolutely nothing about the movie feels like news. 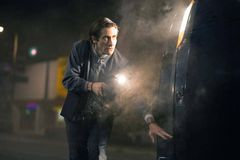 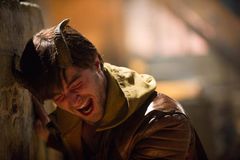 Film Review
Before I Go to Sleep: Amnesia plot makes a movie you’d rather forget
October 31, 2014 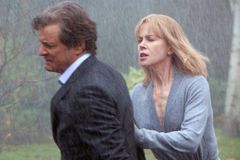 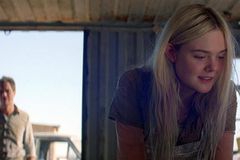 Film Review
Maps to the Stars: A haunted tour of Tinseltown
October 31, 2014 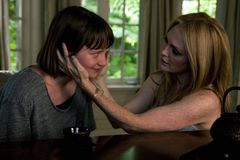 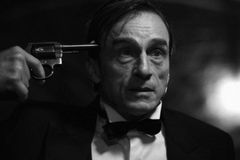