Written and directed by Jim Jarmusch

Jim Jarmusch's nocturnal romance film Only Lovers Left Alive is like an attic full of memorabilia, photographs, books, old machines and vintage musical instruments. His best film since the 1995 western Dead Man is, once again, an idiosyncratic version of a genre film, in this case a vampire flick, although it's about as far from Twilight as you can imagine. The vampires here, played with elegant sang-froid by Tilda Swinton as Eve and Tom Hiddleston as Adam, are lean, pale, hipster blood addicts. They're not so much living dead as exceptionally cool.

Adam's a musician (his drone-and-crash dirges were composed by the director), as well as a record and guitar collector, who lives in a dilapidated house in the ruins of a slightly in the future Detroit. His roadie/dealer and all-around Igor-figure is a cheerful mortal named Ian (Anton Yelchin), who supplies Adam with objects from the outside world. Adam ventures out for night drives through the city in his classic Jaguar to make blood-bank withdrawals from Dr. Watson (Jeffrey Wright). But immortality is weighing on him, and he's given to episodes of suicidal depression over what the "zombies" (that's mortals like you and me) have done to the planet.

The love of his life, Eve, is more into the literary scene, haunting the golden-lit nocturnal alleys of Tangier, where Paul Bowles and the Beat writers trod before her, enjoying her books in many languages and occasionally visiting her old friend, the Elizabethan playwright Christopher Marlowe (John Hurt), who has a line to the "good stuff," or quality human blood. But Eve worries about Adam's mental state and, afflicted by foreboding dreams, decides to go to Detroit (booking night flights all the way, naturally) to see Adam. They make love (pale, lean bodies posed against the dark), suck on blood popsicles, dance and drive through Detroit at night, taking a spin past rock star Jack White's childhood home.

There's a melancholic end-times chill in the air (the zombies have contaminated the blood supply and the water supply is in trouble, as well). Worse, Eve's bratty teenaged sister, Ava (Mia Wasikowska), shows up from Los Angeles ("zombie central," sniffs Adam) and decides to crash for a while. Teenage vampires are the worst! Her bratty misbehaviour forces Adam and Eve to start a new chapter in their lives.

Only Lovers is so fluidly edited and thinly plotted that it feels almost off-hand; yet, it's also made with great care, beautifully lit and set-designed to an eyelash. Beneath this arch take on the overworked vampire genre, it's impossible not to see how personal a film it is, almost Jarmusch's crypto-manifesto on his artistic values. Adam and Eve are children of the sixties (a wall photograph puts their most recent marriage date at 1868), and their literary and musical magpie sensibility mirrors Jarmusch's own. The 61-year-old director acknowledges his own partner of 34 years, Sara Driver, in the credits.

As usual, his inspirations are musical and the soundtrack serves as an excellent mixtape of his eclectic taste, from Wanda Jackson to Paganini. The action stops entirely for two musical numbers, the New York "space rock" band White Hills, in Detroit, and the Paris-based Lebanese singing star Yasmine Hamdan, in Tangier. The film's title, Only Lovers Left Alive, is taken from a 1964 teen revolution novel by Dave Wallis. Jarmusch's mentor Nicholas Ray planned to adapt it into a film starring the Rolling Stones. You could think of Only Lovers as Jarmusch's Rebels Without a Pulse.

Nine years ago, when Jarmusch made his supposedly commercial film Broken Flowers, with Bill Murray, a New York Times magazine profile called him "the last of the indies," a director who had never made a film under a studio's watch. In a phrase appropriate to this movie's genre, he said: "I'm not interested in hitting the vein of the mainstream." He may not hit it this time either, but Only Lovers Left Alive is definitely "the good stuff."

The artistic bloodline of Jim Jarmusch traces back to another of his idols, John Cassavetes, the father of American independent film in a dozen pictures from 1959 until his early death in 1989. Cassavetes's biological offspring, Nick Cassavetes, is a very different kind of director. Like John, he's an actor-turned-director and, ever since his 1997 adaptation of his father's script for She's So Lovely, he's endured unflattering comparisons to his old man.

One thing that father-and-son Cassavetes share is a fascination with stories about women. (Nick's blockbuster 2004 weepie The Notebook featured his mother, Gena Rowlands, the star of his father's domestic epics Gloria and A Woman Under the Influence.) Already, that puts them in a minority of American filmmakers.

But Cassavetes Jr. doesn't tend to make the auteur list. His work is wildly uneven, not only from film to film but from scene to scene. His latest, The Other Woman, written by Melissa Stack, is no exception: Apparently intended as a blend of Bridesmaids and The First Wives Club, it's often oddly engrossing, almost despite itself, largely thanks to the performances and the free rein the director gives his stars.

Cameron Diaz holds the centre of the film as a hard-edged Manhattan lawyer, Carly Whitten, who discovers that her wealthy, handsome, devoted new lover Mark (Danish actor Nikolaj Coster-Waldau) has a wife back home in Connecticut. Carly is ready to cut her losses, chalking it up as one more male disappointment, but the wife, Kate (Leslie Mann), won't make cutting the strings easy. As weepy and emotionally needy as Carly is independent, Kate seeks out Carly for explanation and consolation.

How you respond to The Other Woman depends a lot on how you tolerate Mann's performance, a deliberately grating turn (think Jim Carrey in The Cable Guy, Bill Murray in What About Bob?) that stomps all over your comfort zone. She wears the tight-wound Carly down, who sees in Kate everything she tries to repress in herself. In the film's most rewarding half-hour, the two women bond by getting plastered, exchanging clothes and comparing their disappointment in men. Their incentive for revenge is triggered when they discover that Mark is two-timing (three-timing?) them both with another woman, Amber, a young bombshell in a bikini who looks like a Sports Illustrated cover girl (played by Sports Illustrated cover girl Kate Upton), who joins their cause. ("I feel like she ups our average," says wife Kate.)

The second half of the film is largely grating, as Carly, Kate and Amber do everything from feeding Mark laxatives to slipping estrogen into his morning smoothie. But there are some loose, apparently improvised moments when the actresses are better than the material, which suggests that Cassavetes has some of his father's instincts. The characters fall into female movie sterotypes – Carly the selfish careerist type, which rhymes with "rich," Kate the neurotic housewife and Amber the voluptuous bimbo, but they emerge as something different: The smart and resilient one, the lateral thinker and the empathetic young woman. This is more "feminish" than feminist, but arguably a tottering stiletto-heeled step forward. 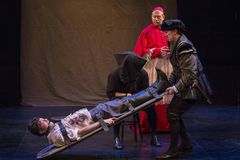 Thumbs up: Statue of Roger Ebert to be unveiled at film festival
April 24, 2014 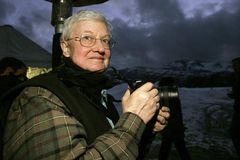 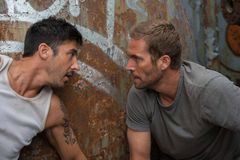