Any kids' cartoon that opens with narration by the mondo eccentric German filmmaker Werner Herzog is bound to bring comfort to hearts of certain parents in the house. They'll know that Penguins of Madagascar is aware that they might wish they were somewhere else, and that it's going to do its best to compensate for that 50 bucks they just dropped on tickets, snack combos and SUV fuel.

Less a sequel to the already antic animals-on-the-lam Madagascar franchise than a hopped-up digression from them, Penguins caters to all those viewers who wished the scene-stealing tuxedo jockeys from those movies – Skipper, Kowalski, Private and Rico – would steal a whole movie and waddle off with it. So here it is: a cartoon entirely hijacked by penguins, and from the outset promising high-velocity silliness to the whole family.

It's a promise Penguins, co-directed by Madagascar franchise vet Eric Darnell and Simon J. Smith, mostly keeps, and largely thanks to the dispensing of any expectation that what we're about to see might be either just artery-cloggingly cute or about hapless critters cavorting in strange lands. Led by the delusively confident Skipper (voiced by Tom McGrath), this quartet is sprung on its mission of world-saving espionage out of sheer boredom at the prospect of spending even another second marching single file with their complacent cohorts across the vast Antarctic blankness to the predacious delight of documentary crews. (Ergo, Herzog in that wicked little cameo.)

Liberated from their ice-encrusted continental prison by the pursuit of an egg that will eventually hatch the perennially redundant Private (Christopher Knights), the penguins hop a boat bound for places more spectacularly suited to their particular brand of anti-natural grandiosity, and wind up living the dream of superheroic badassery when confronted by the weirdly calcium-deficient figure of Dr. Octavius Brine (John Malkovich), whose wobbliness in human form is soon revealed to the result of the fact he's actually a petulant giant blue octopus named Dave. Once the headline attraction at the Central Park Zoo, Dave was relegated to an especially humiliating form of ego deflation after those damned flightless birds became stars and Dave was sidelined to a tank by the public washroom that emptied with every flush. Herein – as if we needed one – is Dave's motivation for the "Medusa serum," a formula for rendering all penguins about as cute as something backed up by faulty zoo plumbing.

Maladroitly teamed with all-animal super-elite spy squad (led by Benedict Cumberbatch's big Brit wolf) known as the North Wind (yes, expect those "breaking Wind" jokes), the flightless four, stuffed to the ear holes with stolen Cheesy Dibbles, land in all manner of noisy and explosive scrapes, all the while unleashing a running torrent of puns, gags, artful non-sequiturs and pop cultural shout-outs. While Penguins of Madagascar comes out swinging in the visual mayhem department, it's really the dialogue that lands the movie's punches, be it Kowalski's tendency to speak momentum-killing truths ("You have no family," he tells the freshly hatched Private. "And we're all going to die."), or Dave's habit of gratuitous celebrity name-bombing while barking orders: "William! Hurt!" "Drew! Barry! More!"

Having apparently left the more polished execution and prestige feature animation rep to its multiply Oscar-blessed competitor Pixar, Penguins' Dreamworks production company has apparently wisely decided to take the low road, compensating in the sheer cheek department for what it lacks in gold-plated status. In this, it now seems to have assumed the role in the CGI feature cartoon sweepstakes that Warner Brothers cartoons once adopted in tactical opposition to the mighty Disney studio, that of the wackier little brother with nothing to lose. Leaving the cute to the bigger kids on the block, with this movie, Dreamworks is opting for pure crazy. And sure enough, the strategy, this time anyway, has paid off in the most unnatural dividend imaginable: darned if these penguins don't fly. 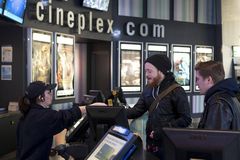