Montreal director Kim Nguyen's Rebelle (War Witch) begins inside an impoverished African compound. The poorest of the poor while away the hours around their clapboard huts by the side of a lake. Babies peer out from behind a plastic tarp. The day ticks along with the bang-clack-clack of a boy drumming on wood.

It's beautifully rendered and familiar, a Western version of blanket African desolation in all its humanity, poetry and need for help. The refugees speak French, and so the scene is perhaps Congolese – but it matters little to the film. The presumption is that this could be anywhere in the sub-Sahara – as could the horror that is about to descend.

Rebel fighters run ashore in makeshift boats, storm through the camp with assault rifles and massacre families and abduct children to become soldiers. One teenage girl becomes the story's focus – Komona, played by the gifted Rachel Mwanza, who has also appeared in Kinshasa Kids about street children in the city. Before she is carried away, Komona is forced to kill her parents.

With a less-talented director, that would pretty much summarize the film: Komona's devastating story, streaked with humanitarian appeals and sweeping African landscapes. Nguyen, however, turns it into a far richer film, depicting the varied worlds Komona passes through within the Congo's interior.

Suffering beatings and exhaustion, as well as hallucinations from drinking milky tree sap, Komona begins to see visions of the dead. It's a change in fortune. Her visions help her outrun an ambush and survive a barrage of bullets. They give the jungle a human essence and guide her, acting as a spiritual buffer in times of trouble, a reason to continue living.

Her visions change her position among the other children. She's now deemed a witch. They also mark a stylistic shift in the film from the hard reality to understated, magic realism.

Then another shift comes when the children are taken to the rebel stronghold, run chaotically by a warlord named Great Tiger. Here the film dives into the schoolyard violence of the rebel organization, children leading children, only to shift again to Congolese daily life after Komono and her young love Magicien desert the rebels and try to return to an ordinary town.

Each shift acts as a distinct chapter of the film, flowing together under Nguyen's direction. Last year's Café de Flore from Canadian director Jean-Marc Vallée used a similar style. Is this the start of a new, codified, Quebecois style? In the hands of someone else, you could imagine a much more linear film, one that stacks hardship upon hardship, layering one humanitarian truth upon another.

Nguyen instead twists reality at each turn. Komona's journey is a series of surprises, giving her character depth and turning her into much more than a victim. It also makes Rebelle far more than a war film, ending far afield from the opening scene. Some of Rebelle's turns are tender, like when her friend Magicien satisfies a quaint courting ritual and Komona gives him the perfect "Now what?" look with her eyes. Some remain brutal, like when she escapes from a forced relationship with a lead soldier.

So is this a Western take on Africa? Yes, but Rebelle is full of such careful detail, and is carried so beautifully by Mwanza's performance, that questions of authenticity slide away. 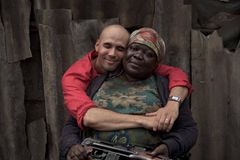