The apple of a young man's eye doesn't fall too far from the (family) tree in Renoir. This handsomely mounted historical drama concerns the desirous triangle between the great Impressionist painter Pierre-Auguste Renoir, his live-in teenage model Andrée Heuschling, and his son Jean, who recovered from a battlefield injury in the First World War to become one of the most important French filmmakers of all time. The idea that two generations of great artistry would be inspired in two very different media by the same tempestuous, temperamental young woman is poetic, but Gilles Bourdos's film is more conventional than its mould-breaking subjects deserve.

Arriving at the Renoir estate on the shores of the Mediterranean in the summer of 1915, Andrée (Christa Theret) isn't content to simply serve as the silent subject of her host's painterly contemplation. She's a firebrand, with flashing eyes and blazing red hair, and she inflames the men around her: Previously listless and arthritic, Auguste (Michel Bouquet) takes frantically to his canvas while Jean (Vincent Rottier) opts, for the first time, to pick up a camera. It's one of the script's better jokes that the elder Renoir is so bored by the cinema that he falls asleep at a screening organized by his son: Having already spent his energies galvanizing the modern evolution of one visual art, he literally doesn't have the energy to look toward the future.

It's clear that a lot of the imagery in Renoir is meant to evoke its main namesake's artistic output. There's a hazy, sunblind blur to Mark Ping Bing Lee's cinematography that suggests the requisite palette of pastels and watercolors. The film is beautifully made in a processional style, with each country-house ritual (picnics, dinners, posing sessions) unfolding patiently, in its own good time. The stately pacing is appropriate to the story, but because the parallels in the screenplay are so obvious, and the story's ultimate destination a foregone conclusion – we know that Jean will eventually make his first batch of movies with Andrée (under her celluloid pseudonym of Catherine Hessling) – a strange, self-cancelling sensation takes over. This is a story about the exciting elusiveness of the creative spark that is itself utterly bereft of spontaneity – a movie content to simply hits its marks with precision, instead of seeking out interesting detours.

Bouquet has the plum role, and he chews it juicily down to the pit: His Auguste is impressive and imperious, and wields the anxiety of influence over his progeny just as deftly as he does a paintbrush. Rottier is less successful as Jean Renoir, partly because he seems a little too pin-up handsome to ever grow into the lopsidedly smiling clown glimpsed in The Rules of the Game (1939), but also because his romantic relationship with Andrée is presented as less compelling and complex than her bond with his dad.

Theret succeeds in giving the character a petulant streak that clashes with her placid physical beauty. Yet even if the opaqueness of her motivations is consciously built into the screenplay – a teasing suggestion that the men who spent their days gazing upon her face didn't really know her at all – she's still too remote to occasion much in the way of audience identification. She's a beautiful mystery to Auguste and Jean Renoir, and to us, as well. 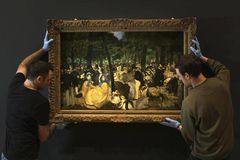 A new film remembers Tom Thomson's life, not his death
September 30, 2011
Film Review
Beauty Is Embarrassing: Portrait of an outsider artist – when it suits him
September 28, 2012 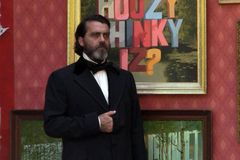