The story of Annabelle: Creation is easily told. Two grief-stricken parents invite a ragtag group of orphans and their nun into their haunted home to be terrorized by a possessed doll. The why is harder to pin down in this unintentionally campy horror.

Directed by David F. Sandberg, Annabelle: Creation is a jumpy, Exorcist-inspired second prequel (the first, simply Annabelle, was helmed by John R. Leonetti) in an ever-expanding The Conjuring franchise. The movie, which banks on the popularity of the rest of the series rather than concern itself with details such as motive, doesn't add up to much. Annabelle: Creation is a series of slowly opened doors and close-ups of a truly ugly doll whose makeup must have been done in the dark by a deranged artist similarly possessed.

Dolls are perfect fodder for horror because their lifeless bodies are blank canvases for fears and anxieties – it's the imagination of the audience that does all the work. For Freud, a man who devoted his life and work to charting the origin of these fears and anxieties, "the 'uncanny' is that class of the terrifying which leads back to something long known to us, once very familiar." In other words, the sunken eyes of a doll can send a chill up the spine not because they look strange or foreign, but because there is something faintly recognizable in their blank stare. The Annabelle series lazily trades on the uncanny, hoping to rouse familiar fears without explaining why.

The film, set in the dusty 1950s for no apparent reason other than to justify it as a pre-prequel, stars Stephanie Sigman (Spectre) as the God-fearing nun Sister Charlotte, with Lulu Wilson and Talitha Bateman. The doe-eyed best friends are two of the six orphans of the St. Eustache Home for Girls looking for forever homes. These good Catholic girls are taken in by the Mullins – a doll-making couple whose daughter Annabelle died in an accident 12 years prior. Miranda Otto (The Lord of the Rings, Homeland) and Anthony LaPaglia (Joe from the 1990s cult classic Empire Records) play the unwittingly sadistic parents who invite the wards into their demonic funhouse. Mrs. Mullins has a chic Phantom of the Opera aesthetic that adds a little panache to the movie's drab setting, if not the terror it intended.

The first film's screenwriter, Gary Dauberman, returned for Annabelle: Creation, though he didn't do anyone a favour. The script is full of mawkish dialogue weakly delivered by the film's child actors. The cast's standout kid is Bateman who gets the most screen time and uses it as well as she can. Horror movies have always loved the terror of young girls (and orphans), and Bateman plays the quivering-lipped innocent with aplomb.

However, Sandberg does nothing to update his horror film from some of the genre's more damaging stereotypes. Bateman's character Janice has recently been disabled by a polio outbreak and it's her physical weakness, the movie suggests, that makes her the doll's first target. Sandberg's film faithfully hews to Hollywood's old tropes about disability as a "burden" to the able-bodied and as weakness to be preyed on. Sandberg's last film, Lights Out, also took aim at disability by concluding that depression can be rooted out – through the act of suicide. It seems it's not just Annabelle: Creation that is stuck in the 1950s. 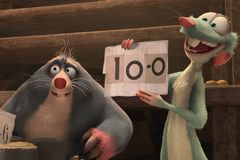 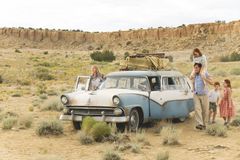 Film Review
Review: Wind River deftly steers through a twisting murder-mystery
August 9, 2017
Follow us on Twitter @globeandmail Opens in a new window
Report an error Editorial code of conduct
Due to technical reasons, we have temporarily removed commenting from our articles. We hope to have this fixed soon. Thank you for your patience. If you are looking to give feedback on our new site, please send it along to feedback@globeandmail.com. If you want to write a letter to the editor, please forward to letters@globeandmail.com.
Comments