Osti de tabarnak de calice, it's taken a bloody long time to produce a sequel to Bon Cop Bad Cop. But Patrick Huard and Colm Feore are finally back this summer and, happily, they bring with them a more mature comedy than the original.

Back in 2006, the bilingual buddy movie was something of a Canadian phenomenon. Starring Huard as the foul-mouthed, protocol-allergic Montreal cop David Bouchard and Colm Feore as his by-the-book Anglo colleague Martin Ward, it earned $12.1-million at the domestic box office.

Of course, 80 per cent of those tickets were sold in Quebec where Huard is a beloved celebrity, but the $2.4-million that the film earned in the rest of the country did represent a tidy sum for a Canadian title outside Quebec. As long as you don't adjust for inflation, Bon Cop Bad Cop can claim it beat out Porky's as the best-performing Canadian movie ever.

Still, English Canadians might have loved it more if they hadn't been portrayed as a race of uptight party poopers and snobs: Let's face it, the Bon Cop Bad Cop formula was not exactly sophisticated, relying as it did on broad cultural stereotypes of the two solitudes and a hokey plot about a psychopath taking revenge for the sell-off of Canadian hockey teams.

Over the past decade, there have been varying accounts of the delay in producing a sequel: Huard, who originated the bicultural concept in the first place, had complained about the suits getting in the way, but once financing was finally in place, his own creative instincts were to go slow on producing a script (which this time he was writing solo).

It proves to have been a wise move because Bon Cop Bad Cop 2 is the rare follow-up that does not suffer sequel-itis: It's a movie that develops a franchise rather than just cashing in on it.

Bouchard and Ward have moved on in their lives while Huard and Feore have deepened the characters. The craziest member of the Sûreté du Quebec has reunited with his ex-wife and seems at relative peace with himself and the world, perhaps because he's able to exorcize all his wilder instincts gleefully stealing cars: Bouchard has gone undercover to break up a ring run by a local mobster.

Ward, on the other hand, seems repressed and embittered and so, while Huard successfully softens his lovable character, Feore makes his harder and realer, turning Ward's comic Anglo reserve into genuine darkness. Feore is still playing Huard's straight man, but this time the balance between the two characters is more equal – and more interesting.

Since we saw him last, Ward has moved from the Ontario Provincial Police to the RCMP and he blunders into Bouchard's undercover operation with his own federal bust of the car-theft ring; the two start working together again, trying to track a terrorist plot that leads from the mobster's stolen cars to the side entrance of the U.S. consulate.

Sure, Huard and director Alain Desrochers trot out the clichés – and reproduce the weaknesses – of the genre. Things explode. Often. Just coincidentally, one of the cop's children gets involved, introducing lots of potential for sentiment. (Last time it was Bouchard's daughter; this time, it's Ward's son.) One of the backroom boys on the RCMP squad is the increasingly recognizable figure of the eccentric computer nerd who can hack anything – although Quebec comic Mariana Mazza does give the character a bit of a feminist twist, playing a hyper, joual-spouting tomboy with both pigtails and extra testosterone.

And, of course, there are holes in the plot. What federal officer who needs to warn U.S. colleagues about a potential crime on American soil takes a number and stands in line at the consulate?

But alongside the predictable or the improbable, there is also a solid entertainment where comedy, action and some genuine heartache mix rather successfully. All the Anglo-Franco stuff is still there as Bouchard and Ward butt heads bilingually, but this time the real target is the United States as the film spoofs American paranoia and ignorance.

Huard's script veers boldly from this mockery to more serious moments and, taking over the direction from Erik Canuel, Desrochers handles this range and the many action scenes with dexterity, showing a good ear for both the film's comedy and its emotions.

At one point, an outraged Bouchard finds himself in custody in a small New England police station where alarmed state troopers peer at him through the security glass; figuring that his cursing sounds like the chef on The Muppet Show, they decide that his odd patois must be Swedish. Yet only minutes later, when Ward joins his colleague in the cell, Feore creates a genuinely dramatic moment as his character finally confesses to Bouchard the real reasons for his toughened persona.

It's an unusual movie in which two such scenes could co-exist so closely and it's testament to Huard's ambitions for the script, Desrochers's subtle direction and Feore's skill as an actor that it works. Turns out Bon Cop Bad Cop has simmered nicely during that decade on the back-burner. 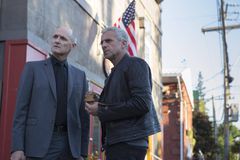 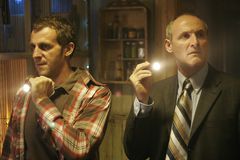