With his debut feature Dim the Fluorescents, Toronto filmmaker Daniel Warth has created an astonishing calling card – an earnest and entertaining celebration of process and performance, not to mention a tremendous showcase for two homegrown actors on the cusp of greatness.

The film focuses on Lillian (Naomi Skwarna) and Audrey (Claire Armstrong), a playwright and aspiring actor, respectively, struggling to make a living by putting on stark corporate demonstrations, elucidating topics ranging from customer-service techniques to grisly workplace injuries. "Everything we do is special," Lillian says, and it's true.

Through these short and serious plays put on for stunned nine-to-five audiences, the women edge closer to their real dream of creating interesting and affecting art. There is a beautiful chemistry between Skwarna and Armstrong, a clear intimacy between them as they jam and spar, step by step, tête-à-tête.

When the women are offered a grand opportunity – a leadership demonstration and an audience of hundreds, their biggest yet – they panic, their anxieties threatening to tear them apart. Add to this equation a mix of secondary characters/obstacles in Fiona (a blotchy teenager and budding actor foisted on the pair), Gary (the client), Bradley (an accidental sexual harasser), June (the friendly nemesis) and an absent cat, and Warth's film becomes a hilarious and poignant jaunt through the creative process, laced with raw edges and bravura.

It is easy to see why Warth's work, co-written with Miles Barstead, won the Grand Jury Award for Best Narrative Feature at the Slamdance Film Festival, where it premiered early this year. Full of simmering emotions, core truths and cool jazz, Dim the Fluorescents is a comedy that careens into tragedy and then emerges, panting and pithy, into the light. The film bores into the heart of the creative endeavour, falling in line with recent works such as Lady Bird, Girls and The Incredible Jessica James, all centred on young women struggling to find self-actualization and a voice.

It's also a film in which Toronto plays itself with no shame or remorse, a rare delight for Canadian cinema-goers. Featuring shots of the city's six-pack of Mies van der Rohe towers, Roncesvalles' Revue Cinema, scenes in tequila bar Reposado, a long take on Ossington Avenue and many interior shots in an apartment in Brockton Village, Warth captures a city at once familiar and brand new.

Moving from graceful long takes to angular and intimate close-ups, the camera work by cinematographer Chet Tilokani is wholly unexpected and satisfying, following Lillian and Audrey as they run to meetings and auditions, dance in bars and at home, brainstorm and write together, and speak directly to the audience, breaking the fourth wall with droll commentary. Their impassioned plays feature heart-rending dialogue and aesthetics akin to the low-budget performances of the Max Fischer Players of Wes Anderson's 1998 film Rushmore. (The influence of Anderson is also apparent in the delivery of dialogue – especially in Skwarna's gentle directness and peculiar elocution, which bears echoes of the smarmy and often deadpan Jason Schwartzman – and the vaguely mid-century costumes and set design.)

It's in editing that Dim the Fluorescents only hits a minor snag. At 128 minutes, it is too long and feels it. The narrative meanders, losing itself to aimless and nameless characters, pausing generously to provide glimpses into the lives of extras who are then forgotten in a flash. These extra interactions are worth sitting through, though, and the film's slow burn pays off in the fireworks of the final scene, an electrifying demonstration featuring two incredible performances from actors ready for the spotlight. Just like Audrey and Lillian, Armstrong and Skwarna shine beyond their station, clearly primed for bigger projects. 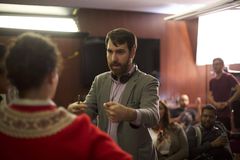