Early in Last Flag Flying there is a remarkable moment when an unsmiling U.S. Marine tries to physically prevent a grief-stricken father from removing his son from the military base to which the young man has recently been returned – in a coffin. Commanding officer and bereaved parent engage in a tug-of-war over the elaborate silver casket. The scene is almost slapstick, releasing into comedy the unease director Richard Linklater has been building over the father's behaviour, and yet, it simultaneously operates as a symbol of the tension between private life and patriotic duty that is at the core of the man's disagreement with the military.

If only every moment in this unusual film functioned so effectively. Battlefield comedy is its own subgenre, soldiers in war being a great source of gallows humour, but treating the home front's sanctimonious cult of the dead warrior to the same dose of black satire is unusual. Linklater has fresh and powerfully articulated themes here – drawn from the novel by Darryl Ponicsan, with whom he co-wrote the script – and he has elicited three standout performances from Steve Carell as the father and Bryan Cranston and Laurence Fishburne as his old Vietnam buddies. Yet, the film also seems uncertain of its own unusualness as Linklater eventually opts for a piece that is little more than a road movie and its rhythm stalls.

Playing a pitiable milquetoast betrayed by both his buddies and by life, Carell hands in a finely tuned performance that continually and successfully walks a line between the comically pathetic and tragically sympathetic. As his version of Larry (Doc) Shepherd sits with head bowed, overcome by the blows the military has dealt him – from his own service with the Marines in Vietnam to his son's death in Iraq – you never know whether he will pop up again laughing or crying.

Called to bury his son with full military honours at Arlington National Cemetery, he seeks out two comrades-in-arms he has not seen since Vietnam. Sal (Cranston) is an old reprobate barkeep, the rebellious trickster who will keep the movie ticking along; Mueller, meanwhile, is a reformed man, an upright pastor who Fishburne cleverly reveals to be more than a little afraid of his former self.

There are some lovely bits of acting from these three, scenes where, as they drive a truck, buy a cellphone or share a drink, the performances quietly soar while Linklater reveals his notable ability (used so famously in Boyhood) to let his characters navigate the action seemingly without interference. That slow-burn naturalism can only take you so far, however, and as Doc rejects Arlington and insists on taking the coffin home with him, Last Flag Flying stumbles into more formulaic road-movie territory. Now its script seeks out improbable delays along the way, and the edge to its bitter comedy grows blunter. The road trip with the coffin eventually becomes a train trip, and there are times you can almost see Cranston pedalling furiously to keep up the comic relief.

What binds these three ill-assorted vets together? Vietnam, of course. In keeping with the anti-heroic and comic approach, Linklater uncovers the secret of their service record delicately and incompletely, rather than opting for the big reveal. It's an admirable move and provides for a telling scene in which the men visit the mother of a deceased comrade, but it also robs the film of dramatic propulsion and Carell of sufficient motivation for the downtrodden Doc, leaving a conundrum at its centre.

As the dead soldier is finally buried, Linklater cannot fully escape the sentimentality associated with military service in an intriguing film that frustratingly fails to produce a whole that is more than the sum of many worthy parts. 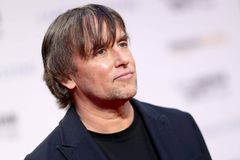 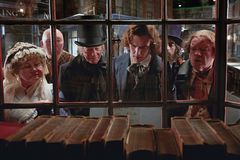 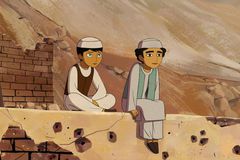