Early in Long Time Running, the riveting new rock doc on the Tragically Hip's country-galvanizing 2016 summer tour, singer Gord Downie recalled what had happened before. The band had an album ready to be released. A tour would be in order – it's just how these things work.And then the news of his terminal condition. Speaking to the camera, he displayed little emotion.

In Gaga: Five Foot Two, a made-for-Netflix documentary on Lady Gaga's life behind the curtains, the singer is shown on multiple occasions in distress. She was suffering from muscle spasms, possibly caused by anxiety, or perhaps it was a lingering hangover from a severe hip injury years earlier.

Masseuses worked on her at her homes in Malibu or Manhattan. "My face hurts," she cries. "Do I look pathetic? I'm so embarrassed."

And the cameras rolled.

A surgeon, we learn in Long Time Running, performed a temporal lobectomy on Downie. At the first tour rehearsal, a once rugged poet was weak and forgetful. He could not recall a name of a Tragically Hip album, let alone any lyrics. "I couldn't remember a damn thing," Downie says. "I think I started to cry."

By the end of July, he was on stage for the final rehearsals in Victoria. Footage shows the singer in much better form, although using teleprompters to sing the words from the new album he wrote before his illness:

I write about words, I find treasure or worse

I watch the end of man and, and I dream like a bird

I remain aloft and I forget a lot

I try not to try and I can remember or not

The film, by Jennifer Baichwal and Nicholas de Pencier, documents an experience that many of the Tragically Hip's fans will have no problem remembering. Concert footage competes for space with backstage moments and interviews with the band and those in its orbit. "Is he going to drop?" guitarist Paul Langlois remembers wondering at the beginning of the tour. "That was hanging over everybody."

Long Time Running, named after a languid blues song from the band's second album, is both a history lesson and a eulogy for a group with 16 Juno Awards to its credit. With last year's tour likely the band's final one, time is given to the band's earliest years, dating back to high school in Kingston. "It's the fabric of my life," drummer Johnny Fay says. Later, Downie tells a story about his mother looking at his book of lyrics and dictating which songs were proper for him to sing and which were not. He stood up to her. "My career," he says, "started that day."

We are confronted with a shot of Downie in his underwear, polishing his shoes before one of the concerts, just as he has always done – and just as his late father, a travelling salesman, would have done on the road himself.

Where Gaga: Five Foot Two is too occupied with the pop star's maudlin moments, Long Time Running comes with little self-pity. It's too simplistic to suggest that a solo artist would be more self-absorbed than a singer in a band. But the Tragically Hip shares its songwriting credits five ways, even though Downie is the chief songwriter and most charismatic attraction.

Keeping the democracy in the band was at times "tortuous," we learn.

According to lead guitarist Rob Baker, while the band members "had each other," when it came to the group's enigmatic singer "the audience was his family" as well.

Downie is shown winking to the crowd here, blowing kisses to the fans there. "That's what I'm here for," he sings to the audience in Ottawa, in Edmonton, in Toronto, in Vancouver or in Kingston, "born ready for you."

Given the circumstances of the tour, it would have been ridiculous for Baichwal and de Pencier not to shine more light on Downie. They found the right balance, though, celebrating a band's place in the country's cultural fabric.

In the end – and this may well be the end – Long Time Running is about perseverance, both the band's and Downie's. The Tragically Hip's first Juno Award was in 1990, when they were judged the year's most promising group. They're still together, without a membership change. They keep their promises.

Long Time Running is now open across the country. 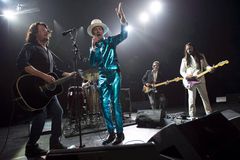 Gord Downie and Justin Trudeau want Canada to focus on the next 150 years
July 2, 2017
Gord Downie appointed to the Order of Canada
June 21, 2017
Follow Brad Wheeler on Twitter @BWheelerglobe
Report an error Editorial code of conduct
Due to technical reasons, we have temporarily removed commenting from our articles. We hope to have this fixed soon. Thank you for your patience. If you are looking to give feedback on our new site, please send it along to feedback@globeandmail.com. If you want to write a letter to the editor, please forward to letters@globeandmail.com.
Comments