There's a quiet, discreet magic at work with Charles Officer's latest documentary, Unarmed Verses. The Jamaican-Canadian director builds the film from the ground up, using an elegant observational style and respectful tone to tell the story of an urban community in city-planning flux and a poetic young black girl working to find her strength and voice. "Light shining, light moving, no darkness, heart beating," the 12-year-old Francine Valentine says softly. "Do you let the light shine?"

The film is a poignant, blossoming 86-minute experience about the power of art (among other things). We meet schoolgirl Francine as she tries (and succeeds) to make sense of Edgar Allan Poe's poetry. At the age of 4, she had come to Canada from Antigua, sent by her mother to live in northeast Toronto with her father and grandmother. Unarmed Verses covers months. Not by accident does Officer start the film with a drone shot of a snow-crusted community housing project – it's not like the place from where she came.

It's home now, though. But for how long? Her neighbourhood is facing the prospects of a "revitalization" program shepherded by well-meaning white politicians and a real estate developer with the slogan "Built for life." Oh? Built for whose life? If the city okays the revitalization, the residents will be forced to leave their neighbourhood for years while the demolition and construction takes place. Moreover, the displaced people worry they won't be able to afford the new townhouses when they're completed.

His latest film came about after Trayvon Martin, a young black student, was killed in 2012 by a neighbourhood watch co-ordinator in Florida. Following the murder (and other racially charged incidents), the National Film Board cast a net for a project that would explores issues of race and youth in Canada. Unarmed Verses became that film.

When she's not filling notebooks with her thoughtful verses, Francine watches a television sitcom about attractive white kids. On the wall, there's a poster with a pretty young white girl, with the word "perfect" scrawled on it.

Francine would seem to trust the director. She doesn't seem to be conscious of his presence, and when she talks about how hard it is to find one's voice, there's the sense that she's not saying anything for anyone's benefit other than her own as she works out her self-esteem issues.

Officer trails Francine to the Art Gallery of Ontario, where she contemplates the art of Jean-Michel Basquiat and tells the biblical story of Samson with great detail. She says the expression of art is a way to escape reality. One might argue with her thesis. Does it not help in decoding reality? Comprehending reality?

(Then again, there's an escapism to the film score, with original music by the producer duo Menalon and cuts from the avant-garde saxophonist Colin Stetson and the curious young pianist Jean-Michel Blais.)

One of the film's threads deals with a community centre and a program involving music instruction. Francine is inhibited – too insecure to let her verses fly and for her words to be recorded. She's afraid to fail.

Will she find her voice? I think you have a pretty good idea on whether or not she will succeed on that count. As for Officer, his voice is fine. Saying a lot with a little, his economy is artful, excellent and rather a joy. 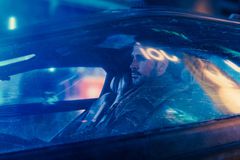 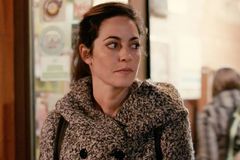 Film Review
Review: Soaring past the facts of its source material, American Made feels like a writer’s flight of fancy
September 29, 2017 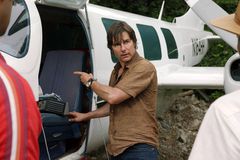