To me, Stanley Kubrick's The Shining has always seemed a minor work that only a major director could have made, a psychological fright flick stuck in a strained limbo between the pure horror mechanics of Stephen King's original novel and the more interior take imposed on it by Kubrick's adaptation.

Well, the quintet of superfans in Room 237 couldn't disagree more. This strange, frustrating, occasionally fascinating doc immerses us in their frame-by-frame obsession with the 1980 film, and in their extravagant claims for its vast significance. Because we never see them, but only hear their voice-over analysis, they come to seem as ghostly as any of the apparitions in the movie under discussion, until a documentary about The Shining begins to shine with its own ambiguous glow: Are these enlightened critics or dark nutcases themselves?

Director Rodney Ascher, inevitably a self-confessed Shining junkie, assembles the voices and then plays, and replays and replays again, the individual scenes crucial to their specific dissection. Two in the group, journalist Bill Blakemore and history professor Geoffrey Cocks, have already developed a reputation in this rather narrow field, and are quick to establish their credentials.

So Blakemore, citing the fact that the film's haunted house, the Overlook Hotel, is said to be built on an ancient burial ground, develops his thesis that "the movie is about the genocide of the American Indians." Hmm, tangential references maybe, but "about"? Surely not.

Meanwhile, Cocks sets his thematic sights on another genocide, the Holocaust, finding proof in Kubrick's highlighting of a German typewriter and the calculated recurrence of the number "42" (the Final Solution was adopted in 1942). But when he points to the most haunted room in the haunted house, 237 of course, and does some quick math – "2 x 3 x 7 = 42" – our eyes glaze and we start to fashion our own thesis, the classic one about some people having way too much time on their hands.

The glaze only thickens when the other voices join the fray. Someone drones on about spatial anomalies in the picture, such as the appearance of "impossible windows" in interior rooms. Another, an avowed conspiracy theorist, argues that Kubrick was employed by the National Aeronautics and Space Administration to shoot fake footage of the moon landing, and then detects in The Shining a convoluted admission of that fakery.

At this stage, it's safe to conclude that much of this close analysis is itself over the moon, and we've entered that netherworld where the passionate eye can find in a totemic object or sacred text pretty much anything it wants to find. In other words, believing is seeing.

For reasons that elude me, certain fright flicks – Alfred Hitchcock's Psycho is another obvious example – lend themselves to this sort of obsessive scrutiny. Medical science has a phrase for it: excessive ideation, or, in common parlance, taking an elephant gun to an ant. Some of us have experienced this condition while imbibing an illicit substance and pondering, say, the metaphysical import of the tip of that pencil clutched in our sweaty palm. Or counting the number of angels that can dance on the head of a pin.

Such musings, like this doc, are kind of fun while they last, but then the high ends, sanity returns and the pin is once again just a slender metal object. And The Shining just a minor work by a major director. 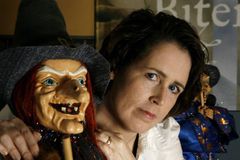