Australian film director Justin Kurzel has answered the pesky question: "How many children did Lady Macbeth have?" She had one, a child of about 3 or 4, who the Macbeths are seen burying on the blasted heath as their drama opens.

That question was traditionally posed by scholar L.C. Knights as a mocking example of criticism that is obsessed with character at the expense of theme, or that simply doesn't understand that characters aren't real people. But in truth, Kurzel's decision to go outside the play to provide context for the climbing couple works exceptionally well. This screen adaptation of the famous Scottish play is very Scottish, very bloody and very clever, if inconsistently so.

Kurzel and designer Fiona Crombie have set the action in the Highlands in a violent and primitive Celtic society where Christianity would appear to have no stronger hold than the magic of the witches, portrayed as three undistinguished peasant women all marked with the same bit of scarified cross-hatching on their foreheads. The Macbeths' village is one of tents grouped around a small wooden church; it is only when he kills the king that Macbeth (Michael Fassbender) ascends to a stone castle. The scenes on the battlefields, meanwhile, are filled with blood and gore, making explicit the chaos and the violence that lies behind the dynastic struggles of the play. In short, this Macbeth is not so much about getting ahead as it is about sheer survival.

Judging the performance of any mythic Shakespearean role is always a bit like judging figure skating – did he land the triple axel? – and in that regard, purists may not appreciate the way screenwriters Jacob Koskoff, Michael Lesslie and Todd Louiso have trimmed Shakespeare's script to its bare bones, with Kurzel dispensing snippets of speeches across multiple locations. It's a powerfully cinematic approach, but it does leave Fassbender's soliloquies feeling rather exposed. In particular, the dark philosophizing of the "Tomorrow and tomorrow and tomorrow" speech fails to resonate in this less-than-loquacious kingdom.

Still, Fassbender is particularly gripping on the initial hardening of Macbeth and, backed by those quietly creepy witches, very effectively portrays the man as a pawn of fate, allowing himself to be driven by the prophecies and stupidly emboldened by the promise that he will not be killed by anyone "of woman born." Fassbender's intensely physical performance (at one point he goes out riding in his nightshirt) creates a kind of anti-Hamlet, a man who no sooner thinks something than does it, driven to action by the pollution of his own mind.

As she who pours in the poison, Marion Cotillard offers a surprisingly gentle interpretation of his wife; she is perhaps the most sympathetic Lady Macbeth I've ever seen. The small smile on her lips as she rides toward that stone castle suggests not the satiation of an ambition-crazed mad woman but rather the satisfaction of a privileged lady who has just managed to secure a bit more comfort than her neighbours enjoy. In Cotillard's hands, her final madness is as touching as that of any Ophelia.

There are mistakes here. The Scottish and Northern English accents of all the secondary characters, including the witches and Jack Reynor's excellent Malcolm, lend the piece grit and make you long for a film in which every performer speaks with this authenticity; alas, given the demands of star casting, that is not to be.

The decision to depict the murder of Lady Macduff and her children as a public execution, rather than as a secret murder, stretches the plot in directions that the script can't quite hold. And using a Gothic cathedral to provide the interior of the royal palace at Dunsinane is anachronistic (whether you place Macbeth in its historical 11th century or in the early period of Celtic Christianity that this film appears to favour). But more importantly, it evokes a world too wealthy and too delicate to feel consistent with the film's dark vision of subsistence and survival.

And there are some brilliant solutions, too. Birnam Wood doesn't come to High Dunsinane through some feeble bit of business involving soldiers disguised as trees; it floats up as ash after Malcolm's troops set fire to it.

Finally, the most important discovery of this film is the children in Macbeth. From that first dead child to the sweetly enduring presence of Banquo's son, Fleance (Lochlann Harris), and the execution of all Macduff's "pretty chickens," the camera lingers on the children, recalling their love, their confusion and their horror from scene to scene. Macbeth's murders are an assault on lineage and this version reminds us that in this unforgiving place, it can only be the children who will ensure the survival of the tribe.

Film Review
Action film In the Heart of the Sea is an underwhelming voyage
December 11, 2015 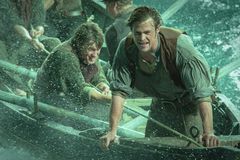