It's impossible to discover Frank D'Angelo without becoming mildly obsessed. Perhaps you first saw this Canadian beverage mogul on a TV commercial for his Cheetah Energy Drink, where Ben Johnson proudly exclaimed, "I Cheetah all the time!" Perhaps you've stumbled on his weekly talk/variety hour, The Being Frank Show (Friday nights on a purchased timeslot on Hamilton's CHCH). Perhaps you learned about him through a chapter of his colourful personal and professional life: the quick rise and sudden fall of his Steelback Brewery empire; his bid to buy a CFL team. Whatever it was, you probably lost the rest of your day in a D'Angelo-related Google black hole.

Or perhaps you haven't discovered him yet. If not, you're in luck: his latest film, Sicilian Vampire, is now enjoying an "exclusive premiere engagement" at the Colossus Vaughan Cineplex, just north of Toronto. Thanks in part to the investment of pharmaceutical billionaire Barry Sherman (D'Angelo's former partner in Steelback), D'Angelo, a middle-aged Canadian businessman, has lately willed into existence a career as a TV/music/movie star. Sicilian Vampire is his fourth film since 2013 (a fifth, The Red Maple Leaf, has already wrapped filming), and like all D'Angelo projects, it has been aggressively publicized, with full-page ads in the Toronto dailies and high-profile TV spots on Hockey Night in Canada.

D'Angelo writes, directs, produces, stars in, and scores this peculiar Mob/horror epic, described by its author as "equal parts Goodfellas and From Dusk Till Dawn." It was my own mild D'Angelo obsession that compelled me to brave the three-hour transit round-trip and join the 25-person opening night audience. Was it worth it? Well, if you're a D'Angelo fan, it could be the cinematic event of the decade.

D'Angelo stars as Santo Trafficante, a mobster whose life changes when he opens a box of bananas and is bitten by a vampire bat (this must be seen to be believed). He finds himself endowed with superhuman powers – acute hearing, fast-regenerating blood cells and a cute little pair of fangs. He also finds himself at the centre of a brewing gang war, and may soon be betrayed by a member of his own crew.

The plot doesn't unfold like a well-oiled machine. Both the vampire angle and the mob war plot disappear for long stretches, and the film's ultimate message – "Family is the most important thing in a man's life" – feels arbitrary. D'Angelo seems to have unwisely attempted what Quentin Tarantino calls a "hang-out movie," because Sicilian Vampire is packed with endless, shapeless scenes of mobsters sitting around tables, cracking jokes.

The film buckles under the weight of its enormous cast – a remarkable collection of acting heavyweights who are perhaps past the height of their fame. Armand Assante, Michael Pare and Tony Nardi are Santo's fellow wiseguys, while Paul Sorvino and Daniel Baldwin run the rival gang. James Caan appears as the doctor and mythology expert who diagnoses Santo; his scenes with D'Angelo have a clash-of-the-titans buildup similar to Robert De Niro and Al Pacino's meeting in Heat. Daryl Hannah gets the thankless role of Santo's wife. Many other characters were seemingly created only because actors were available for a day's filming. How else to explain Eric Roberts and Art Hindle, who share a few useless scenes as FBI investigators on Santo's trail?

As with all of D'Angelo's films, Sicilian Vampire's main agenda seems to have been to make its author look cool. Nowhere is this more apparent than a scene late in the movie when Santo and his Mob buddies take a nightclub stage to sing Just a Gigolo. Why? "You're always makin' me do things I don't wanna do," mutters Santo to his cronies, attempting modesty that the director arguably lacks.

Then again, maybe the film's unrelenting Frankness is also its greatest strength. Renting a Frank D'Angelo movie on iTunes is one thing: you can pause it, or look around the room, or check your phone. In a theatre, however, it becomes an overwhelming experience. With D'Angelo in so much of the movie, and with so much of the movie scored to one of his R&B songs, Sicilian Vampire is like entering a funhouse where every mirror reflects Frank. By the time it's over, you feel like John Malkovich after leaving his own head in Being John Malkovich, except it's Frank D'Angelo.

For all his shortcomings as a filmmaker, you can't deny that D'Angelo makes his presence felt in every second of his films, and of all of Frank's films, Sicilian Vampire this one is undoubtedly the Frankiest. It may not be for mass consumption but is heartily recommended to anyone who has ever lost an evening on a Frank D'Angelo YouTube binge. You know who you are. 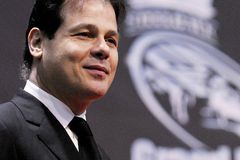 It's time to check your Globe Oscars ballot: How many winners did you predict?
February 23, 2016
A history of ignorance: 50 diverse artists who should have received Oscar nods – but never did
February 25, 2016