If you had to be an alcoholic, you'd want to be like Kate, the young drunk played by Mary Elizabeth Winstead in the new movie Smashed.

Kate is adorable, as she says herself. She's a fun partner to her hard-partying husband, Charlie. While plastered, she can hold her own on the dance floor at a karaoke bar, sing in tune and look gorgeous – in a disheveled, stumbling kind of way.

The next morning, she looks a little greyer, but after a beer in the shower and a nip in the parking lot at the school where she teaches, Kate is full of bounce again. Okay, she's a little less adorable when she vomits into a wastepaper basket in front of her students. When she tries to get off the hook by telling her principal (Megan Mullally, as a motherly, obtuse employer) that she's pregnant, you realize there's a problem. Beneath that attractive façade, Kate's life consists of deceit and remorse, relieved by bouts of intoxication.

Smashed, directed and co-written by James Ponsoldt, is a funny film, both comic and refreshingly off-beat. It's an addiction-and-recovery movie without the usual side-effect of wallowing melodrama. Some of this story, of course, feels predictable and Smashed moves briskly through the familiar stages of the drunkography: Hitting bottom, remorse, recovery, relapse and the gradual process of self-understanding. The strength is in the performances and the script, which provide a lot of credible details without feeling like a case study.

When another night out leads to Kate waking up from another scary bender, she decides to attend an Alcoholic Anonymous session with her strait-laced, socially awkward vice-principal, Mr. Davis (Nick Offerman of TV's Parks and Recreation). There she finds a sympathetic sponsor (Octavia Spencer) and the gradual, uncomfortable realization that living without a cushion of booze is harder than it looks.

Husband Charlie (Aaron Paul) sort of works as a rock critic, a great career if you like living in bars. He also comes from a privileged background, so the day-to-day business of life management doesn't concern him as much as it should. He's more fearful of Kate becoming sober, and moving emotionally away from him, than he is about her disappearing for hours at a time. As Charlie grows increasingly jealous, Mr. Davis starts feeling close to his new protégé. There's a jarringly funny scene that touches on a woman's experience in a world of men with "boundary issues." It's no surprise that a woman, Susan Burke, co-wrote the film with Ponsoldt, partly based on her own experiences as someone who retired from drinking at 24.

Paul, who took home his second Emmy this year for his work on Breaking Bad, is a familiar quantity, the likeable rogue and good-hearted weakling, but Winstead's performance qualifies as a revelation. The 27-year-old actress, who has been an interesting presence on the fringes of mainstream movies since her mid-teens, has earned the "scream queen" title for her work in horror films (The Ring 2, Final Destination 3, Black Christmas, The Thing), and gave a memorable turn as the cooly enigmatic Ramona Flowers in Scott Pilgrim Vs. The World. The leap from those films to her performance here though is roughly the difference between Sally Fields in The Flying Nun and Norma Rae.

As Kate, she is a young woman who is struggling to live above her natural level of self-esteem: Her mother (Mary Kay Place) is an embittered heavy drinker, whose low expectations extend to her offspring. Kate is both an intelligent, serious young woman who has worked to overcome her past, and the emotionally sloppy creature of bottomless need when she comes under the influence. Winstead negotiates both sides of this chasm deftly and the movie's anti-romantic tough-mindedness permits its frequent lightness of tone.

As for the adorable factor, Kate's sober moral inventory puts that in perspective: The disarming charm, she tells her AA group, was a good way to deflect people from noticing what a mess she was, and she kind of misses her old, fun self. No doubt the warmth and smarts of her character also win us over, and give an oft-told story some fresh zest. We can, respectfully, not drink to that. 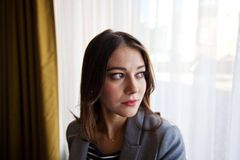 Drinking in the movies: A short history, straight-up
October 26, 2012