Neon bright and all raw energy, Spring Breakers is a pulsating paradox of a movie, both a tangerine dream and a cultural reality check, a pop artifact that simultaneously exploits and explores the shallowness of pop artifacts. It wants to be deeply superficial, profoundly silly, and flings us around in the eddies of that oxymoron like a shipwrecked sailor on a roiling sea. There, tossed about and trying to decide if this is meaningful or meaningless, we're nothing if not engaged, and that engagement may by the ultimate mark of the picture's success. Whether the film is uniquely brilliant or dismissively dumb is not the issue here. Either choice can (and will) be offered – it's the choosing that counts.

Quick to make good on the title, the first shot is an electronically scored montage of the beach movie's signature troika – bikinis, breasts, booze – displayed in bacchanalian splendour on the Florida sands. Courtesy of writer/director Harmony Korine, the aging enfant terrible whose imagination usually runs to the darker and dingier corners of youth cult (Gummo, the script for Kids), such a DayGlo opener seems a big change, a headlong march right into the mainstream. Once again, it is and it isn't. Because the montage is shot by Benoît Debie, the favourite cinematographer of that other enfant terrible Gaspar Noé (Irreversible, Enter the Void), the sequence possesses an eerily hallucinatory quality at odds with the genre's fun-in-the-sun norm. Yes, it's the same, and it's different.

Cut northward to a quartet of co-eds on a near-deserted campus. True to her name, Faith is a practising Christian; true to their party animal nature, the other three, look-alike blondes, are of the pagan persuasion. Despite that, they're all fast friends – female bonding has never been tighter – with a shared need to leave a place where, "Everything is the same and everything is just sad." Confirmation of that assessment comes with a haunting shot of a darkened classroom where grey laptops line the desks like glowing tombstones.

So Florida beckons, but money is short, at least until the blondes steal a car and, armed with a toy gun, rob a Chicken Delight eatery. We see the hold-up only as the getaway driver does, from the outside constantly circling, a detached perspective that neatly echoes the girls' defiant vow of detachment: "Just pretend it's a fucking video game."

Which brings us to the players. Along with his wife Rachel, Korine has cast Selena Gomez, Vanessa Hudgens and Ashley Benson in the lead quartet, all three hitherto best known for their work in squeaky clean projects. Here, dropping F-bombs and bikini tops with like alacrity, they're clearly Disney Girls Gone Wild. And so, thanks to the casting alone, one brand of pop culture, the titillating yet conservative kind, cuts loose from its hypocritical moorings to morph into another brand, the nakedly liberal sort. It's as if Uncle Walt, back in the Beach Blanket Bingo days, reached out a dirty paw to pull the drawstrings on busty Annette.

Yet not one of the girls should be confused with anything remotely resembling an actual credible character. Instead, they're just nubile figures in the movie's own video game which, when the setting shifts to Florida, simply repeats the opening montage and adds their breasts to the bouncing multitudes. Not surprisingly, the dialogue is as scant as their attire and, like Debie's cinematography, takes the hypnotic form of repeated mantras: "It's so great to get a break from reality" or "It's like paradise here." But when the four get jailed after a coke fest, paradise dims and the serpent appears.

That would be Alien, who sports a head of tight cornrows, a mouth with more grill-work than a silver Cadillac, a languid Southern drawl and a lascivious smile – a look that entirely complements his day job as dope dealer/gun runner/wannabe rapper. He bails out the girls, then lures them to his den, whereupon the light/bright tone downshifts into palpable menace. "I just have a bad feeling," whispers Faith before slipping away, and so do we. The big bad gangsta is the predator, the three remaining girls are the prey. Convention demands it.

Except that Korine stands convention smack on its cornrowed head. Graduating with ease from toy guns to real, the blondes proceed to teach the serpent a few hard lessons in garden-variety manners. "Do you think you can just own us?" one shouts, wedging the gun barrel between his grillwork. For his part, Alien proves a surprisingly good student. In the only piece of acting in the entire picture, James Franco plays him with an underbelly of vulnerability, a near-naïveté beneath his macho swagger. And this injects a semblance of method into the apparent madness of the film's most bizarre sequence: Gathered outside around a white piano, the girls stand armed for battle in bikinis topped with pink ski masks, while Alien sits at the keyboard crooning a heartfelt rendition of Britney Spears' Everytime.

Some will see that moment, and the movie that enshrines it, as a shining example of female empowerment, of young women exploiting their sexuality without being exploited by it. In that sense, the gals want exactly what the film wants – to have it both ways, to flaunt even while flouting, to parade even while provoking, to be a Playboy bunny with a Rottweiler's bite.

Obviously, others will regard that same moment as just another in a long line of ludicrous "breaks from reality." And they'll be right too. Enlightened dream or empty nightmare, you choose. For my part, this much is certain: When Spring Breakers was over, the onrushing dream/nightmare ended, I awoke with a keen desire to replay the whole tape again, to watch it anew in the clear light of a northern day, the better to do what our modern culture is ever asking us to do – sift the sense from the nonsense. 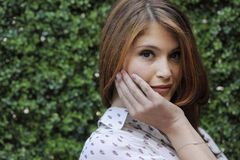 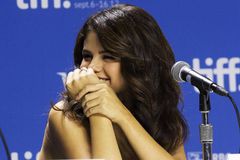 For the stars of ‘Spring Breakers,’ high-minded questions
September 7, 2012 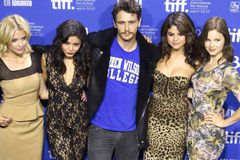