To say that Seth MacFarlane's Ted 2 is an improvement on his last film, A Million Ways to Die in the West, is one of those "damning with faint praise" deals. That film was totally laughless. Ted 2, meanwhile, coaxed exactly three laughs out of me during its 115-minute running time. That's one laugh every 38 minutes. Or, after some generous rounding up, 0.03 laughs per minute. Granted, I'm a pretty easy laugh when it comes to jokes about Aerosmith frontman Steven Tyler's insane face.

Speaking of faces: the saving grace of Ted 2 is that MacFarlane's is hidden behind the fuzzy, not-unappealing form of the titular talking teddy bear, who was magically brought to life in the first movie to pal around with his BFF John (Mark Wahlberg).

The hardest thing about A Million Ways was watching MacFarlane, whose caricaturish good looks – dimpled chin, knowingly devilish glint in the eyes, etc. – make him seem, well, weird. There's this whole aesthetic theory about the "uncanny valley." It states that creations that appear and move in a way that's mostly-but-not-quite human can illicit revulsion in the viewer, comparable to watching the antics of an animated corpse. MacFarlane is living, breathing, totally human proof of this theory. There's something just…sort of…off about him. Yet as the voice of a swearing, bong-hitting, Bud Light-swilling teddy bear, MacFarlane feels right at home.

Ted 2 picks up with Ted marrying his longtime girlfriend, Tami-Lynn (Jessica Barth). When the two plan to save their failing marriage by having a kid, their adoption plans are stymied when it's revealed that, legally, Ted isn't a person. Ted and John team up with an upstart lawyer named Sam Jackson (Amanda Seyfried; and yes they milk the "Sam Jackson" joke for all it's worth, which isn't much to begin with) to prove that Ted is just like you and me, and not property of Hasbro, which hopes to disassemble Ted and build living, talking, cursing teddy bears for all the children in the world.

The plot has a certain Pinocchio ring. But it more directly recalls a Star Trek: The Next Generation episode in which android officer Data has to demonstrate his personhood, or else surrender to the tinkering of Starfleet scientists who hope to replicate his unique consciousness.

MacFarlane acknowledges the debt by inserting ST:TNG cast members Michael Dorn and Patrick Stewart in minor roles, and figuring the show's Enterprise starship prominently in a sequence set at New York City's Comic Con. Considering the number of times MacFarlane has been accused of ripping off ideas and characterizations, acknowledging his Star Trek debt with a wink and a nudge is a canny move.

But then, this is MacFarlane's whole tack as a comedian. He appropriates and recycles pop culture in the most fatuous and self-satisfied way. Recognize a famous character like Gollum or Obi-Wan Kenobi, and you're in on the joke. It's the kind of thing that gets called "irreverent," but that would presume anyone is reverent of My Little Pony or the Kool-Aid Man or Chucky from the Child's Play movies. What it reveals isn't so much a satiric sensibility as a readiness to please, to show viewers that he's just like them – breathing the suffocating air of the same pop cultural ecosystem.

It all culminates an a Comic Con melee, with Transformers and Imperial Stormtroopers bouncing off one another, as Godzilla knocks down a pyramid made of Play-Doh cans. This is MacFarlane's idea of comedy in a nutshell: smash some easy pop references together, and it'll be funny.

But MacFarlane's eagerness is never more apparent than in his bent toward the saccharine. He wants to do the silly parody stuff of Mel Brooks. He wants to do the bromantic riffing and dick-and-fart jokes of Judd Apatow. He wants to be the Hollywood song-and-dance-man as dopey schlub. But he also wants the swooning strings and big emotions of Frank Capra.

That he tackily hangs Ted's fight for legal personhood on references to gay marriage, the Civil Rights movement, and America's history of slavery (this has to be the only movie that references both Dred Scott and Rocky III's Clubber Lang) isn't so much topical as it is openly disrespectful.

MacFarlane wants to prove that there's something like a heart beating somewhere inside that densely-packed stuffing of pop reference and juvenile humour. He wants his sappy, faux-poignant emotional moments, but has no idea how to sell them without warping himself into some repugnant pose. It's as hard to watch as his attempts to contort his smug, smiling face for comic effect in his last movie. And in a way, it's pitiable more than anything.

Like Ted the swearing bear, Seth MacFarlane just want to be a real boy.

Summer movie preview: From Fantastic Four to Poltergeist, 19 flicks coming your way
May 7, 2015 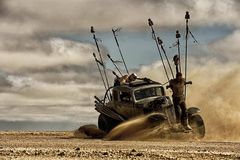