For having gone to the trouble of making a self-descriptive movie called Teenage Mutant Ninja Turtles, its producers seem ultimately unsure about its most basic concept.

"So, you're … ninja, mutant, turtle teenagers?" asks journalist April O'Neil (Megan Fox) early on, when the titular characters are revealed. "When you put it like that," one of them quips, "it sounds ridiculous!"

So unfolds more than half the running time of TMNT, the first theatrical live-action reboot of this comic/cartoon franchise since the early 1990s. And while the human players take their sweet time coming to grips with the possibility of anthropomorphic turtles in their midst, the filmmakers simultaneously spend the entirety trying out different blockbuster visions for their heroes, not quite knowing yet how a ninja, mutant, turtle teenager should be, and sacrificing cohesion for the mindless fun of figuring it all out.

Is TMNT's main inspiration Batman Begins? The opening sequences take on the air of a gritty refresh, with New York projecting a Gotham feel, and the samurai crime lord Shredder (Tohoru Masamune) leading his Foot Clan on a fearsome crime spree that mere police can't stop. The word "vigilante" is even thrown around forebodingly – that is, until a cloying bit of self-aware dialogue chastises one turtle for putting on his Batman voice.

But once the film shifts to all-out action, eventually, it bears a strong resemblance to the Spider-Man series. Despite being restyled as hulking, near-invincible, pavement-pounding creatures (this reboot uses animated bodysuit technology, rather than the rubber Jim Henson suits of yore), the four turtles perform acrobatic feats that have them whipping through sewer pipes and slingshotting across the screen like a certain friendly, and much less hefty, neighbourhood superhero.

The weakest homage draws from Transformers, which is unsurprising, if pretty lame, given Michael Bay's involvement here as a producer. The narrative focus of TMNT mistakenly hones in on the human protagonists; it's a technique that works just fine when your star attractions are giant transforming robots who, understandably, are not able to convey a full range of emotions.

In that regard, the film misuses the truest spirit of the TMNT story: the human qualities of its mutant characters. Here, they do indeed have distinct personalities: the leader Leonardo (played by Pete Ploszek, voiced by Johnny Knoxville), the nerd Donatello (Jeremy Howard), the goofy Michelangelo (Noel Fisher), the rebellious Raphael (Alan Ritchson) and their noble master, Splinter (played by Danny Woodburn, voiced by Tony Shalhoub). The turtles are gregarious, non-stop chatterboxes who get all the good zingers, even when being hurled off the side of a skyscraper – but they're mere caricatures, with viewers being asked to fill in the blanks through nostalgic memories of cheese pizzas and cowabungas.

Instead, we are forced to care much too much about the lives of O'Neil and her cameraman, Vernon Fenwick (Will Arnett). O'Neil, we learn, has a sinister childhood connection to the turtles that her journalistic sleuthing uncovers. Even odder is the subplot where Fenwick is pegged, for comedic effect, as the sad-sack sidekick with a crush on the heroine (the 16-year age difference between Fox and Arnett may more aptly be considered creepy). Arnett feels miscast as the counterpoint to Fox's sullen, serious acting, which needs a foil less acerbic and dry – and old – than what his usual persona offers.

This is the first TMNT instalment; it certainly won't be the last. There's no shame in stitching together the most entertaining aspects of the superhero genre's standard-bearers. But if TMNT the franchise is going to reach the same lofty heights of blockbuster-dom, it still needs to find its own inner hero. 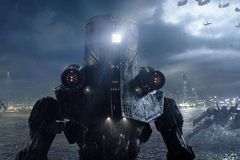