A dystopian toon satire that evokes The Matrix by way of Who Framed Roger Rabbit, or Metropolis reconceived as a cautionary Hollywood nightmare, Ari Folman's followup to the Academy Award-winning Waltz With Bashir can't be faulted for lack of ambition or ideas. Coherence and a sense of humour maybe, but there's something to be said for a movie that manages to baffle and dazzle in equal measure. If Daffy Duck had taken up political and media theory, his brain might look like this.

Based loosely on Stanislaw Lem's 1971 novel The Futurological Congress, which depicted a world happily drugged into a state of hallucinogenic passivity, Folman's interpretation provocatively supplants mass distraction for pharmaceuticals and digital culture for the ultimate enslavement of the human spirit. Entertainment is what keeps us looking the other way, and technology convinces us there's no looking back.

It begins in live-action, so-called real life, as the actress Robin Wright, playing a post-prime actress named Robin Wright – the movie was actually shot in 2011, before Netflix and House of Cards resparked Wright's star – is provided with an especially cruel and unforgiving account of her bomb-strewn career by agent Harvey Keitel. But the studio Miramount, presided over by an especially unctuous Danny Huston, has come calling with a final offer, and the purpose of Keitel's extended reading of the career riot act is to get Wright to take it: She will be scanned, digitized and made forever virtually young, her studio-owned and operated avatar unleashed in a series of brainless cyber-pulp movies while the real Robin ages in anonymous offscreen obscurity.

Although the idea of flesh giving way to bytes is at least as familiar as The Matrix and as fresh as Her, it remains a potently alarming premise, especially when contextualized as a middle-aged single mother's only hope to sustain an ongoing career and provide the necessary care for a terminally ailing son. But this is only Folman's first act, and The Congress really hits its own conceptual acid peak when it flashes forward 20 years and Wright has been invited to an all-animated alternate reality to renegotiate her contract. In this realm of studio-generated grotesquerie and splendour, wherein the ingestion of the contents of a small vial permits one to be whatever animated character one wishes, Wright encounters not only all manner of Max Fleischer-like cartoon weirdness – including a lot of wish-fulfilment replicants of herself – but the intimations of a conspiracy aimed to topple the corporate powers and burst the bubble of toon tyranny.

And this is where The Congress itself succumbs to another form of hallucinogenic delirium, as the movie pinballs between a state of whispery, cartoon-noir conspiratorial paranoia and a blissful meditation on a kind of eternal animated utopia – dangerous, of course – that suggests a queasy hookup of What Dreams May Come with Yellow Submarine. The central conflict here – whether Robin will accept the new virtual reality or opt out to live in the scorched-earth desolation of the undrugged world – gets needlessly and frustratingly obscured by all the stoner imagery and explicatory McLuhanesque philosophizing Folman throws in its way, ultimately resulting in a movie that asks you to do what it was just warning you about: stop thinking and dig the scenery.

It's also kind of strange that the cartoon dystopia The Congress imagines is so out of time itself: a realm of old-school cell animation and not CGI, a place where people imagine themselves as John Wayne, Elvis and Marilyn Monroe and not Miley, Beyoncé or Thor, and where Robin Wright is all washed up because Netflix and House of Cards aren't around to provide that one-way express ticket out of Toontown. 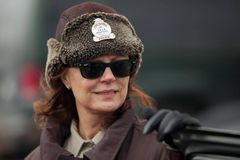 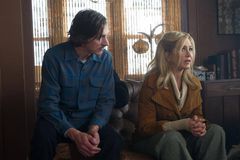 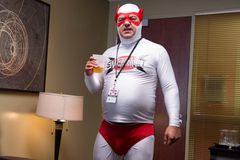