Back for a hedonistic romp at the expense of many are Edina Monsoon (Jennifer Saunders) and Patsy Stone (Joanna Lumley), two aging fashion insiders facing the continual existential crisis that they are on their way out in a world where it's everything to be in. Absolutely Fabulous: The Movie chronicles Patsy and Eddy's moves through London's heady fashion scene, a flamboyant and fickle landscape filled with champagne-fuelled parties and hangover-tinged morning meetings. Monsoon, a publicist, is confronted with her waning appeal from the moment she wakes up and is urged to try a "spritz of afterbirth" as part of her morning skincare regime when simple Botox isn't working. (And yes, placenta is an "it" ingredient in beauty products in Asia; one of Saunders's abilities as writer of the film is to sniff out the most extreme and absurd aspects of the fashion and beauty industry and cleverly skewer them.)

Already tackling the challenges of the ravages of time and dwindling client roster – currently reduced to Emma Bunton, a.k.a. Baby Spice, and 1960s singing sensation Lulu – Monsoon's problems come to a head when an unfortunate incident at a fashion show fete leads her and faithful sidekick Stone into exile in the South of France (as one does). The sarcastic and slapstick appeal of Ab Fab's television incarnation is still well intact throughout the Mandie Fletcher-directed story; reminding the audience continually that Ab Fab is expressly a satire is especially helpful when they're expected to swallow some rather off-colour jokes about Monsoon's soon-to-be transgendered husband.

These very un-PC moments – others come at the expense of Monsoon's African-born granddaughter – can bring the laughter to a halt during this hour and a half, as can the somewhat stifled acting of the myriad fashion personalities peppered throughout the film (Jerry Hall, Kate Moss) and of Robert Webb, who plays the new boyfriend of Monsoon's long-suffering and painfully square daughter, Saffron – played with usual harried indignance by Julia Sawhala. It's imaginably hard to keep up with the combination of Saunders and Lumley, who've embodied their respective vodka-soaked personae for decades with lovably loathsome perfection.

Monsoon's style predilections have been updated for the film – replacing Christian Lacroix as her favourite designer du jour is Stella McCartney, and an outsized cartoonish phone case is her accessory of choice – but her whiny, self-destructive behaviour patterns have not. Nor have the outrageous antics of Stone, who in one scene, while trying to calm Monsoon, pulls a package of pills from her sky-high coif.

Playing two women trying desperately to be relevant while also clinging to the fading embers of their heyday, Saunders and Lumley are at once reprehensible in their self-obsession and unworldliness, but also rather pitiful. And while this idea is at the centre of the film, in typical fashion for Eddy and Patsy, nary a lesson is learned by the conclusion. Finding deep meaning and satisfaction from this story will be difficult, but if it's style over substance you're after, then you'll revel in the comedic chic. 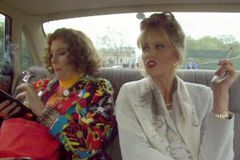 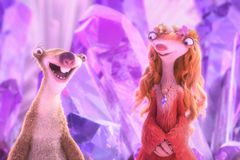