That girl – or more properly that woman – on the train is an embittered alcoholic who has crawled inside a vodka bottle to escape the memory of her failed marriage even as she stalks her adulterous ex-husband and his new wife.

As director Tate Taylor and screenwriter Erin Cressida Wilson turn the bestselling British novel The Girl on the Train into an American movie, the woman's heartbreak, her anger and her drinking all feel touchingly dramatic. That's thanks almost entirely to Emily Blunt's smeary-eyed and trembling version of the pathetic Rachel, always dialling her ex's cellphone after she's had a few. What is much less plausible, and not particularly thrilling, is the outlandish plot in which she entangles herself as she rides a commuter train that passes by her former home.

The film moves the story from the old railway suburbs of London to wealthier ones outside New York, leaving an audience to puzzle over why people this prosperous wouldn't move further from the tracks. Indeed, their perfect houses are so close to the passing train that Rachel can spy on her ex and his new wife living with their baby in her old house – and witness an apparently happy young couple who live a few doors down.

That couple, fond of copulating near curtainless windows or embracing in their garden, seem like the perfect pair until Rachel sees the woman up on her balcony kissing a different man. Rachel is enraged by this new example of adultery and when the woman goes missing the following day, the erratic and obsessive alcoholic, terrified that she may have assaulted the adulteress during a blackout, turns detective to find a culprit.

The notion of a barely functioning alcoholic with long gaps in her memory as a crime-solving protagonist provides an unusual twist on the old amnesia ploy and a strong premise for a thriller, while Blunt does full justice to a disintegrating yet likeable character.

But Paula Hawkins's original novel included not only this unreliable narrator but also two other first-person voices and, on film at least, they prove much less compelling. Rebecca Ferguson plays the new wife Anna as sweetly domesticated in her marriage to Tom (Justin Theroux) and prettily alarmed by Rachel's stalking, but nothing more. As the woman on the balcony, who is Anna's neighbour and coincidentally her nanny too, Haley Bennett can't make head nor tail of the troubled Megan's erratic behaviour. Megan has a complicated and distant backstory that she tells to her psychiatrist to justify her promiscuity but none of it makes much emotional sense as Bennett stumbles from scene to scene. Meanwhile, in the tricky role of the apparently sympathetic and long-suffering Tom, Theroux's bland performance gives no hint of an explanation for a potentially intriguing character.

The culprit in Megan's disappearance becomes rather obvious around the midpoint and, after various red herrings are rapidly dispatched, the unmasking is not exciting enough to fill out the last third of the movie. As Rachel desperately stabs an attacker with a corkscrew, you have to wonder what happened to a story that started out with a provocatively hard-headed take on female alcoholism.

I suspect The Girl on the Train, whose original protagonist was described not merely as alcoholic but also ugly and overweight, has suffered from its Atlantic crossing, one of those artistically unnecessary Hollywood transpositions based on the sad but enduring assumption that American audiences are only interested in things that happen to other Americans – and preferably rich ones. Clearly, the novel's plot was also filled with lurching coincidences, but here it suffers from being further unanchored in any kind of geographic or cultural reality and, rather ironically, driven entirely by the one character played with an English accent.

I say "I suspect," because I am judging the impact of the novel from reviews; I haven't read it – and chose not to, on the theory that, without foreknowledge, I would be better able to judge the impact of what I gathered was a narratively twisted ending. Taylor does find effective cinematic means of rendering Rachel's shifting point of view, replaying scenes as her drunken memories return to her, but the overall surprise feels simultaneously overwrought and flat. Whatever the locomotive power of the novel, this film adaptation only limps into the station.

Film Review
The Birth of a Nation is as fraught as director and star Nate Parker
October 6, 2016 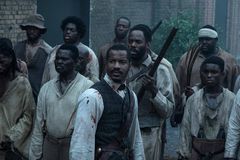 Review
Two Lovers and a Bear fuses a tale of young lovers with northern mythology
October 7, 2016
Review
Middle School: Family film’s creators didn’t listen to their own message
October 7, 2016
Follow Kate Taylor on Twitter @thatkatetaylor
Report an error Editorial code of conduct
Due to technical reasons, we have temporarily removed commenting from our articles. We hope to have this fixed soon. Thank you for your patience. If you are looking to give feedback on our new site, please send it along to feedback@globeandmail.com. If you want to write a letter to the editor, please forward to letters@globeandmail.com.
Comments