The unseen work force is often referred to but seldom seen in stories about economic fallout, like The Company Men and The Big Short. Those films tend to stick with the alpha dogs, and how they're affected by capitalism run rampant – engrossing social realism can seem drab compared with the rarefied corner-office machinations of hedge-fund savants. In contrast, The Measure of a Man is about one of those everyday people who lose their livelihood and are at risk of losing everything else, and on this small scale and rather ordinary canvas the human drama is keenly felt.

Downtrodden Thierry, played by Vincent Lindon, is the stoic centre of the film, his third with director Stéphanie Brizé; Lindon's portrayal won him the best actor award at last year's Cannes Film Festival and a César too. As the Dardenne brothers most recently did in Two Days, One Night, Brizé looks at the effect of market forces on self-interest and the breakdown of community. This is life as it happens in the working class, chronicled in the travails of a fiftysomething unemployed factory technician as he tries to keep ahead of the bills while scrabbling for a decent job and caring for his son, who has a disability.

Brizé explores the issue through a series of Thierry's interpersonal exchanges – with a job consultant, a prospective employer (in an excruciatingly passive-aggressive Skype interview), a reproachful financial adviser who urges him give up his home, and so on. For added naturalism, most of these roles are played not by actors but by the real people who do those jobs, in plain-spoken and seemingly unrehearsed conversations. (The social realism also sometimes has a repetitious, absurd undercurrent – including one circular exchange with a civil servant about unemployment benefits in particular – making Brizé a Kafkaesque French version of Ken Loach.)

Early on, Thierry drops out of a group lawsuit against his former employer because he just wants to put it behind him. Yet moving on consists of a few steps back for every one forward, and the indignities are small but steady. At first, Thierry and his wife still enjoy dance classes, but, as their lifestyle deteriorates, they give up even that modest pleasure and instead roll up the living-room carpet to practise at home. Except at home, every interaction contains a small humiliation for one of its participants (even the guidance counsellor coolly outlining the consequences of the son's suddenly poor grades, indifferent to the family's cause).

At a group job-training session among equals where nothing is at stake, Thierry is brought even lower by peers who openly critique a tape of his mock interview. Even though they're all in the same situation, those who sit around the table are encouraged by the instructor to speak up – and with relish they rush to chime in and disparage everything from Thierry's posture and laconic replies to his seeming lack of enthusiasm, even deriding the casualness of his open-neck shirt.

A cruel irony comes next: Thierry indeed does put on a tie and jacket, but it's to work as a lowly supermarket security guard. He is trained in loss prevention and use of the store's dozens of security cameras, taught how to look for behavioural cues and how to anticipate that both customers and fellow store employees will steal. He is paid to expect the worst and bet against people's better nature, all while paying as careful, close attention as possible.

Throughout the film, the camera is in a surveillance position too, jump-cutting between painfully long unbroken scenes that feel like the static of a security video. They also wring out the discomfort, especially when Brizé stays on Lindon's woebegone face as he takes in the verbal punches, one after the other.

In scenes where the security guard catches shoplifters, each has a sadder reason than the last. Except for one brazen thief with bravado, most are in some way the pathetic byproduct of circumstances that wouldn't exist in a more empathetic economic system. (If I'm belabouring that it's an unfeeling system that expects the same of its workers, it's that Brizé does too: One crime unsubtly involves a store loyalty card.)

Thierry attempts to maintain basic courtesies ("Let's keep this polite") and to keep the job while being a troubling rarity – a person whose compassion has survived the unforgiving system. The question, though, is for how much longer? 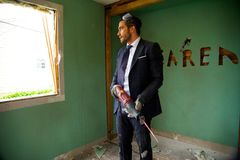 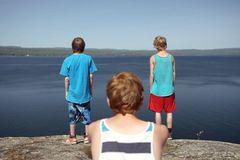