There are movies that are flawed, or weakened, because they're not entirely sure what they're about. And then there are movies, more fatally, that are about something quite different than what they think they are.

Morgan Neville's The Music of Strangers might well fit into the second category. Early on in the documentary, director Neville, he of the Oscar-winning Twenty Feet from Stardom, shows Yo-Yo Ma, the founder of the Silk Road Ensemble, which is the movie's focus, playing a beautiful selection from Olivier Messiaen's Quartet for the End of Time, written in a German prisoner-of-war camp. Osvaldo Golijov, the Argentinian composer who is something of a godfather to Silk Road, then comes on camera and suggests that the only way to counterbalance the horror of life, its meanness and violence and terror is to take revenge – to take revenge with beauty.

It's a lovely quote, and certainly is one of the things The Music of Strangers thinks it's about. Although first formed in the 1990s, Yo-Yo Ma's decision to firmly establish an ensemble of musicians from wildly varying cultures, based in the middle of the world, in a cultural line from Spain through the Mideast to China, was solidified, he says, by the events of Sept. 11.

And so many of the fine musicians he has assembled for his ensemble, are victims themselves of wars and revolutions, from Wu Man, the pipa player influenced by Mao's Cultural Revolution, to clarinettist Kinan Azmeh and kamancheh player Kayhan Kahlor, whose lives and careers have been distorted and mangled by the revolutions in Syria and Iran.

Their stories, beautifully told by Neville, are a meditation on human misery and the power to overcome it using a fragile piece of wood with a few strings on it, or a clarinet, or a bagpipe, or a flute, singly, or in combination with others. It is this powerful combination – the music of strangers – that seems to be the focus the film wants for itself.

But, intentionally or not, it has another. Neville never really convinces us that the beauty of the Silk Road's performances can change the world, but he does show that the music has changed the world of the performers themselves. Fascinatingly, the musicians in the film are strangers, not to one another, but to themselves. This starts with Yo-Yo Ma himself, who notes that, as a child prodigy, he ended up in his 30s with a life he had never chosen, and one in which he struggled to find meaning. The Silk Road was the result.

So many of his colleagues are the same: a band of gorgeous, beautiful, wild exiles – separated from their cultures, either physically, or historically, playing instruments whose traditions are fast evaporating. This is the story of Wu Man and her pipa (a Chinese stringed instrument) or Cristina Pato, the wild child of Galicia, and her bagpipes. Their struggles and sadness are part of the story of the Silk Road, maybe more powerful than the successes the group has had worldwide.

This unrealized focus is not to say that The Music of Strangers is not worth seeing. It is, for many reasons, not the least of which is Neville's pacing and the beautiful camerawork, as well as the many fine performances. Its confused storyline means that the film occasionally rolls in a sort of repetitive loop, but, in the end, it's actually the story of remarkable and extraordinary individuals, faced with their powerful talent, and a world which commodifies them, or ostracizes them, or uses them, or tries to destroy them. The Music of Strangers shows them fighting back. 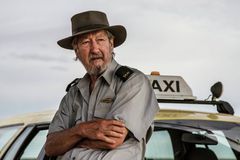 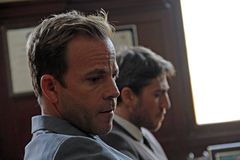 Film Review
Out of Print is a quasi-documentary that’s enthusiastic, but redundant
July 8, 2016 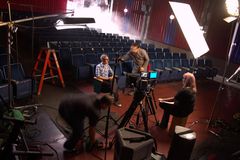