If Asghar Farhadi wins his second Oscar at the end of the month, he can thank Donald Trump. The Iranian auteur can't travel to the United States to attend the 89th Academy Awards because of the U.S. President's sweeping ban against the citizens of seven Muslim-majority countries, and it seems entirely likely that Academy members will express their disapproval by naming The Salesman best foreign-language film of the year.

The Salesman was not the favourite to win – that place belonged to the German comedy Toni Erdmann until last Friday – and Farhadi had just won in 2012 when his previous film, A Separation, earned Iran its first-ever Oscar. But if The Salesman was nominated in the first place, it is because it is an excellent film: subtle, layered and probing. It is a work entirely worthy of any prize anyone chooses to bestow on it, a compassionate and intelligent thing that should linger long after the 24-hour news cycle is over or the political flavour of the month goes stale.

Oscars tend to be decided by some industry group think, and word on the street after The Salesman played Cannes and Toronto last year was that the film was good – but not as good as A Separation, which had charmed Western audiences with its surprising insight into a middle-class Iranian marriage.

The Salesman is a less tidy film, its characters' dilemmas less easily summarized, the reason it invokes Arthur Miller's Death of a Salesman not immediately clear – but those puzzles are its strength as Farhadi observes the ripples in the pond after an act of violence. Where A Separation used a cliffhanger ending to make its point about the stark choices its characters were forcing on each other, The Salesman leaves you to work on a more complex decoding of actions and motivations long after the screen has gone dark.

The film begins in a moment of chaos and alarm as the camera darts from one startled person rushing out an apartment door to another frightened neighbour shouting instructions or running down the stairwell in a collapsing building that is being evacuated in the middle of the night. The circumstances are never fully explained – a shot of the construction site next doors insinuates the building has been undermined – and the outrage one would expect in North America never ensues. Bad luck is often a stand-in for bad governance in the cinema made under dictatorial regimes, and Farhadi is a master at creating tightly focused domestic dramas whose social implications apparently elude Iran's censors.

With the camera's sidelong glances at its characters and lingering shots of its settings, that atmosphere of anxiety in the face of half-perceived or ill-explained events hovers over the whole film. The protagonists are the high-school teacher Emad and his wife Rana (played by Shahab Hosseini and Taraneh Alidoosti), both of them amateur actors appearing as Willy and Linda Loman in Death of a Salesman. Now desperate to find a new apartment, they accept an offer from a colleague and move into a place where the previous tenant mysteriously refuses to remove her belongings. The neighbours imply that she's a prostitute but the apartment is also filled with evidence of her and her child's apparently happy existence.

Another of the film's mysteries is what exactly happens one evening when Rana, who is alone in the apartment taking a shower, is attacked by a visitor. From there, The Salesman reveals itself both as a drama of suspense and as a portrait of a marriage – Emad's protective instincts curdle when they mix with Rana's fear and shame. Ultimately, he wants to find the culprit and take his revenge, which provides the film's surprising outcome.

Alidoosti's quiet performance as Rana brings a compelling naturalism to the woman's new frailty and emerging strength of purpose, while Hosseini draws an unsettling picture of Emad, intelligent and sensitive but increasingly unsympathetic as his patience wears and his doubts harden.

Farhadi is notably sensitive to the restrictions placed on women in Iran and to the dilemmas faced by a victim of sexual assault, but the film is also a critique of class. Like A Separation, The Salesman turns on a potentially violent encounter between the relatively comfortable protagonists and poorer, more traditionally minded working-class characters. Who's in the right is a matter of some debate.

In one pivotal classroom scene, Emad begins to lose your sympathy when he shows his teenage students The Cow, a bittersweet classic of the Iranian cinema in which a rustic protagonist falls in love with his cow. Emad, the stressed-out urban sophisticate, falls asleep during the screening.

As for the references to the American Miller classic, a salesman, of a sort, does eventually appear in the action, played by Babak Karimi as a bumbling opportunist. Miller's themes of domestic betrayal and shattered hopes are echoed quietly in Rana and Emad's strained marriage, but the play within the film seems to act primarily as a mirror for the characters' emotional health; the amateur actors' ability to perform on stage is a reflection of their ability to function in the outside world.

With The Salesman, Farhadi opens a window into his own society that offers a universal view of the emotional rivalries within the human heart. Neither America nor Iran could ask any more of an artist.

Review
The Space Between Us: Send this mission back to Mars
February 3, 2017
Film Review
Afterimage: In his final film, Andrzej Wajda refuses to bend
January 31, 2017 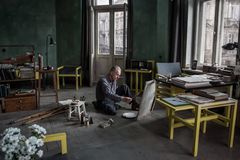 Film Review
Rings: Like an ancestral curse, this sequel is better off left alone
February 3, 2017 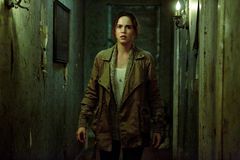