Title
The We and the I
Written by
Michel Gondry, Paul Proch, Jeff Grimshaw
Directed by
Michel Gondry
Starring
A group of teen actors from the Bronx
Country
U.K./USA/France
Language
English
Year
2012

First Alexis de Tocqueville and now Michel Gondry – perhaps it takes a sharp-eyed Frenchman to explain America to Americans. Unlike his 19th-century predecessor, Gondry confines his travels to a very specific locale: the Bronx, the infamous Fort Apache neighbourhood, on a public bus. Yes, a bus, which a swarm of teenagers board for the ride home on their last day of school. Like a sociologist with a notebook, the movie observes them closely on their boisterous trip, with special attention paid to two dramatically different and competing types of behaviour – the tyranny of the group dynamic versus the sensitivity of the lone individual, The We and the I.

No, this isn't a documentary. Instead, Gondry recruited his actors from the local population and, with their help, fashioned a script around them. He's quick to shed a dull stereotype: These kids, black and Latino and mixed race, may be a tough bunch but they're certainly not gang-bangers or addicts, just unformed and vulnerable teens on the cusp of a waiting summer, prone to be cruel yet also aching to be kind.

We pick them up as they retrieve their cellphones, banned from classrooms, then plug back into their life and pile on to the waiting bus. The hierarchy is immediately established. Three alpha males assume their priority seating on the back bench. Two gay guys share a nook, their sexuality known to everyone else and casually accepted. A bespectacled beauty, one of the mean girls, works on her exclusive invitation list for an upcoming party. Getting down to business, the alpha trio bully a big-nosed kid, smash another's guitar, but they're not immune from taunts themselves. Even in the hierarchy there's a democratic groundswell, a collective instinct for self-protection.

Nevertheless, the collective can be vicious. The teens stand as one to mock a middle-aged passenger with a hare lip. The other non-students on the bus merely stare ahead silently and curse their luck. The exception is an elderly white woman, who gives as good as she gets, and then gives too much. But her "apes from Africa" slur, the only racial epithet hurled in the film, is treated by the kids as a ridiculous archaism from an irrelevant generation, and their response is a unified guffaw – a hearty, dismissive laugh.

These early sequences are fascinating. However, as the petty bickering and sophomoric jokes continue, we start to feel as trapped as those other passengers. Occasionally, Gondry tries to open things up by using the students' cellphone videos as dramatic flashbacks, notably to some recent drunken bash. But the attempt plays like a visual gimmick, more confusing than illuminating. Worse, as people get off at their respective stops and the crowd thins, the movie struggles with the transition from "The We" to "The I." The climax revolves around three remaining kids – one alpha male, a girl battling depression, a guy hitherto quiet – and is meant to explore the chasm between behaviour in the group and individually. It's a worthy notion yet the abrupt shift feels forced and a bit sentimental, as if sociology suddenly gave way to ideology.

Still, credit Gondry, like Tocqueville before him, with at least re-examining tired clichés and scraping the rust off stereotypes. Consequently, from beneath their underclass reputations, these Bronx teenagers emerge to shuck off the disadvantaged label and reveal themselves for what they are – just kids, good and bad, confused and fearful and hopeful, scattering into another summer's brief embrace. 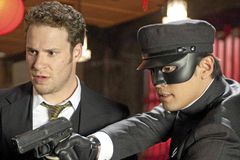 Human Nature: How very uncivilized
April 26, 2002
Follow us on Twitter @globearts Opens in a new window
Report an error Editorial code of conduct
Due to technical reasons, we have temporarily removed commenting from our articles. We hope to have this fixed soon. Thank you for your patience. If you are looking to give feedback on our new site, please send it along to feedback@globeandmail.com. If you want to write a letter to the editor, please forward to letters@globeandmail.com.
Comments