In Quentin Tarantino's world, there's no rest for the outrageous.

His new film, Django Unchained, is the follow-up to his Second World War drama Inglourious Basterds, which saw a squad of brave Jews assassinate Hitler and bring the war to a close. With Django Unchained, the counter-factual history is a little less dramatic, but the provocation is just as extreme: This antebellum action comedy sees Jamie Foxx as a slave transformed into a righteous cowboy vigilante, in an unnervingly irreverent take on the horrors of slavery.

Given that Hollywood's treatment of slavery has ranged from the repulsive (The Birth of a Nation) to patronizing (Gone with the Wind), there is an overdue aspect of historical restitution going on here. It's also a strike against attempts at contemporary revisionism that have seen legislators in Texas and Tennessee (two states where the film takes place) alter textbooks to reduce or drop references to slavery.

Yet Tarantino's approach is so enamoured of the exploitation cinema he emulates, there is a serious risk that noble intentions get smothered in juvenile comedy and cinematic grandstanding. The record number of uses of the N-word (109, according to Variety), and the instances of men and women stripped, whipped, forced to fight to the death, torn apart by dogs or threatened with castration are racial sadism as entertainment, both for the white people in the movie, and, by implication, every movie-ticket buyer.

For the devoted fan cult, Tarantino's signature style – perfectly calibrated action set pieces and flavourful stream-of-consciousness dialogue – are all here. The same goes for a predictable revenge plot: After Django is freed from bondage, he enters a training period with bounty hunter Dr. King Schultz (Christoph Waltz), in scenes evocative of Uma Thurman's Bride in Kill Bill, before confronting the evildoers. As well, there are the usual cinephile shout-outs in this hybrid of blaxploitation and sixties spaghetti western: Django Unchained comes with so many allusions to other works, it should probably come with onscreen footnotes.

One such reference point is the cinema of Sergio Corbucci, whose 1966 spaghetti western Django, starring Franco Nero, is a template here (Nero gets a cameo). There is also a touch of German mythology: Waltz, a bounty hunter pretending to be a dentist with an absurd giant tooth on a spring atop his wagon, is as unctuously charming and verbose as he was in Inglourious Basterds, but here he is a voice for enlightened European reasoning opposed to American barbarism. Very much Django's educator, he compares Django's quest to rescue his wife, Hily (Brunhilda von Shaft), to Siegfried's mythical quest. Less-high-flown references evoke Mel Brooks's Blazing Saddles and Richard Fleischer's Mandingo, with former heavyweight boxing champ Ken Norton as the sex slave.

Provocative bad taste and high style are Tarantino's signature, but what is truly shocking is how often he lets the film lapses into tediousness. He continues to be a terrific scene writer, but the connective tissue is less convincing, and at two hours and 45 minutes, the film feels ponderous, and the sporadic bratty humour is not enough to leaven the mix. Clumsy flashback sequences are obviously intended as genre parody, but they strain patience.

Thanks to the introduction of new colourful characters, things pick up in the second half when Django and Dr. King (get it?) have amassed enough money from bounty-hunting to try to buy Brunhilda (Kerry Washington) out of slavery by posing as dealers interested in buying some male fighting slaves. They head off to the epicentre of evil, a plantation named Candyland, where Brunhilda is held captive by plantation owner Calvin Candie (Leonardo DiCaprio).

DiCaprio is in fine form, revelling in a performance that suggests Late Brando Baroque, as a yellow-toothed epicene connoisseur of fighting slaves who spins his absurd racial theories over fancy dinners. The Candyland episode also provides us with a chilly turn from Samuel L. Jackson as an octogenarian house Negro, Stephen, a shrewd protector of the status quo.

The weakest link in Django Unchained is, unfortunately, Django. Foxx's transformation from an unkempt and unclad slave, to a servant in a puffy Little Lord Fauntleroy outfit, to a tough dude gunslinger is almost all visual. While silence, for the traditional western hero, is a source of power, too often Foxx's character seems merely a cipher for Tarantino's ideas of tough-guy cool, and remains one-dimensional despite the costume changes.

Even the explosive final half-hour, featuring the cartoonish flying bodies and splatterrific payback that are the director's brand, fails to provide the catharsis promised by the title. 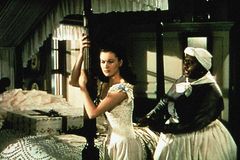