Everything about Michael Bay's fourth Transformers movie is too much. Its 165 minute running time. Its convoluted plot. Its deafening score. Its product placement. Its never-ending action scenes. Its swooping camera work. Its overwhelming stupidity. Well before it finished I was numb from its bludgeoning excess.

The story opens five years after the "battle of Chicago," the CGI extravaganza that ended the third instalment. Despite the fact that the Autobots saved humanity from annihilation, a C.I.A. black ops team led by Harold Attinger (Kelsey Grammer) is hunting down all Transformers, Autobots or Decepticons. Citizens are being asked to report all "suspicious" alien activity.

Shia LeBeouf is gone. In his place is Cade Yeager (Mark Wahlberg) a struggling robotics engineer who discovers a broken-down Optimus Prime in a rotting movie theatre where the owner bemoans all those horrible sequels that have ruined movies.

Yeager's daughter Tessa (Nicola Peltz), a gorgeous blonde who spends her time at their farm in short shorts and high heels, wants him to report the find, but he refuses.

Next thing you know, the black ops team is descending on them and explosions begin.

After narrowly escaping with the help of Tessa's race-car driving boyfriend, Optimus sends out a call to all Autobots, and suddenly they all appear – Bumblebee, Hound (John Goodman), Ratchet (Robert Foxworth), Brains (Reno Wilson), Crosshairs (John DiMaggio) and Drift (Ken Watanabe). The group travels to Chicago to sniff out secrets at the company run by Joshua Joyce (Stanley Tucci), a Steve Jobs-esque figure who is building "better" Transformers in cahoots with Attinger.

Next thing you know, another Transfomer appears out of a giant spaceship. He's got a huge cannon on his face and some message about a "Creator" who wants Optimus for reasons that are never explained and a "seed" that will destroy the Earth.

At this point, the action moves to Hong Kong for reasons that are completely unnecessary other than satisfying the interests of the film's Chinese co-financiers and raking in money from the world's second-largest movie market. This is a movie, after all, designed with nothing more in mind than making cash registers ring, as is evidenced by its heavy product placement. Bud Light, Tom Ford, Victoria Secret and Goodyear are just some of the brands that receive conspicuous screen time.

And don't forget about the toys, which will now include the Dinobots (Transformers in the form of dinosaurs, in case you had to ask). Optimus rides one into battle, a sight that is surely nothing short of awesome in the eyes of 13-year-olds.

Bay is no doubt hoping those kids don't ask too many questions, because once you start wondering why any of it is happening, or try to make sense of all the storylines, you get lost. Of course, it's hard to think clearly when your central nervous system is being bombarded by all these explosions and is dizzy from a camera that never stops moving.

Amidst all the carnage, Tucci is the only actor who rises above something other than one of Bay's stock types. He goes from a wonderfully arrogant futurist to someone with fears and desires and second thoughts that actually resemble those of a human being. Wahlberg, as an overprotective father, has some funny banter with Peltz, but otherwise he is left with dialogue that includes the line, "This alien gun can really kick ass!"

Really, why bother? The franchise so far has taken in more than $2.5-billion (U.S.) at the box office, and a fifth film is already in the works.

The juggernaut is only getting bigger, louder, longer. That may very well serve as Bay's personal motto.

Bay doesn't care about ideas; he only cares about serving up spectacle. As he always has in the Transformers movies, however, he keeps making Optimus Prime blather on about why humans are worth fighting for. (Because we have the potential for goodness. Isn't that something?).

So we know why they want us. It might be time to ask why we want them. 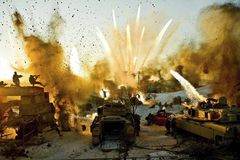