Angelina Jolie's second feature as a director, following her under-the-radar 2011 Bosnian drama In the Land of Blood and Honey, is a beautifully shot, well-acted, and worthy-to-a-fault Second World War survivor story that only intermittently achieves the kind of emotional impact for which it aims.

Adapted from the 2010 bestselling biography by Seabiscuit author Laura Hillenbrand, the film follows the life story of Louis Zamperini (1917-2014), an Italian-American whose resilience made him emblematic of the stoical virtues of the "greatest generation". Touted as an awards-contender long before its release, the film's pedigree includes screenwriters Joel and Ethan Coen (along with Richard LaGravenese and William Nicholson), the brilliant cinematographer Roger Deakins and composer Alexandre Desplat.

Hopes are raised sky-high in the film's opening minutes, in which we find ourselves riding with "Louie" and his crew in a B-24 bomber over the Pacific, as it drops its payload on a Japanese target, and takes heavy fire from Japanese Zero fighters. This classically shot, gripping sequence, free from the usual hand-held jumpiness, gives us an immediate sense of both the ponderousness of the big plane and the vulnerability of the crew inside.

Up in the flak-filled clouds, Louis (English actor Jack O'Connell) flashes back to his childhood in the 1920s, as a scrappy immigrant kid (played by C. J. Valleroy) in Torrance, Calif., heading for a life of violence and petty crime. His older brother Pete intervenes, teaching Louie (as he prefers to be called) to put his energy onto the running track and advises: "Take it until you make it" which becomes Louie's mantra.

He soon develops from town mischief-maker to a track star known as "the Tornado of Torrance." At 19, he heads to Berlin to participate in the 1936 Olympics in the 5,000-metre race, establishing a celebrity that will come back to haunt him a few years later. He's looking forward to bettering his eighth-place finish at Tokyo in 1940, but then the war provides a new challenge.

When Louie's plane crash-lands into the Pacific, only three of the 11 crew members survive, Louie with his wounded pilot (Domhnall Gleeson) and gunner (Finn Wittrock). They have two joined rubber life rafts, exposed to sharks from below and Japanese dive-bombers from above. After 47 days in the open boats, only Louie and the pilot are alive when the Japanese pick them up and deliver them to a POW camp.

This period in the camp covers most of the film's last hour, and revolves around Louie's confrontation with camp sergeant Mutsuhiro Watanabe (Japanse pop star Miyavi). The sergeant, known as "the Bird," is an unremitting sadist who recognizes Zamperini's celebrity and makes it a mission to break his star prisoner.

These scenes are unflinching, as Louie and the other prisoners-of-war have been starved down to skeletal proportions. As he is pounded with kendo sticks and repeatedly punched by fellow prisoners on Watanabe's orders, you imagine his spindly frame will snap in pieces. O'Connell (a veteran the popular British teen series Skins) does a terrific job, not only with the physical demands of the role, but in showing Louie's attempts to disguise his fear through his eyes and muscle-tensing whenever Watanabe approaches him. In one poignantly understated scene, he is allowed to deliver a measured radio message to his family, assuring them that he is being treated "well", given wartime conditions.

Jolie's scrupulous avoidance to melodrama is admirable, though she takes directorial restraint to an extreme – perhaps in deference to the stoical Zamperini, who died in July at the age of 97. The price is a failure of dramatic interest in repeated scenes of Watanabe's cruelty and Louie's endurance. What, if anything, did this suffering mean?

Not until the film's postscript do you get to appreciate the larger arc of Zamperini's life that makes his story not just harrowing, but surprising and inspiring. In a few lines of text in the afterword, the movie covers the years of his post-traumatic stress, his embrace of Christianity and lifelong mission of forgiveness and reconciliation with his former tormentors. Either Unbroken needed to be two hours longer to to explore Louie's spiritual growth or perhaps it should have started at the point where Jolie's film ends. 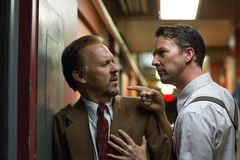