At a restaurant last weekend, I happened to remark to a waiter that the piped music seemed heavy on nineties Number Ones. "It gets the room excited," he explained. "Twenty years later, people are happy to hear even songs they never used to like." There's wisdom in that. Nostalgia is aroused by recognition, not affection, and recognition is nonqualitative – past a certain age, any old thing sufficiently remembered will do.

National Lampoon's Vacation has been a fixture of many childhood memory banks for three decades, but there are several compelling reasons to doubt the film's repute. First, there's a conservatism that rankles all the more from a 30-year remove. Then there's a cruel streak that borders on misanthropy: who wants to have a laugh about a dog being dragged to death at 60 miles an hour? But time has a way of smoothing over the excrescences. Even the bad is remembered dimly as good.

Now we have a new Vacation: a hybrid sequel-reboot, in the fashion of the season, designed with four-quadrant savvy to be enjoyed by millennials in reminiscence and by a younger crowd anew. John Francis Daley and Jonathan M. Goldstein, the writer-director team, seem wary of nostalgia. Indeed, they address the subject in an early scene: the original film's young Rusty Griswold (Ed Helms), now married and a father of two, proposes to his family that they embark upon a cross-country drive from Chicago to California's Walley World for Memorial Day Weekend, as he did as a child 32 years before. The clan is unmoved. "You want to redo your vacation?" asks wife Debbie (Christina Applegate), surrogate for a skeptical audience. "My vacation had a boy and a girl," Rusty retorts. "This one has two boys. And I'm sure there will be plenty of other differences."

The differences prove slight. I suppose we have Phil Lord and Christopher Miller to thank for this attitude of winking, self-referential (and self-deprecating) cynicism: their take on 21 Jump Street made it possible for the hip to reframe unoriginality as an ironic pose. So instead of working to persuade us of the need for a remake of a well-liked film, Daley and Goldstein simply concede straight away that they can't. "I've never heard of the original vacation," says Rusty's son James (Skyler Gisondo), like a junior executive at a pitch meeting. "It doesn't matter," insists Dad. "The new vacation will stand on its own." At which point we're assured that Daley and Goldstein don't believe it can.

On the road, nevertheless, the Griswolds go, whereupon calamity swiftly befalls them. Like Griswold vacations past, the disasters zip past ludicrous toward the inanity of a Saturday morning cartoon; unlike Griswold vacations past, the peril in which the family finds itself isn't leavened by anything funny – unless fist fights and curse words are your idea of a laugh riot. (There's so much dead air in the film that I wondered whether punchlines had been cleaved out to secure a PG-13 rating, but no: it's a hard, inexplicable R.)

Rusty Griswold never had a good vacation: his childhood adventure to Walley World was ruinous, but he's been deceived into thinking otherwise by time. Smarter filmmakers would have seized upon this point as a presiding theme. Daley and Goldstein can hardly be bothered. Their skepticism toward nostalgia goes only as far as it allows them to excuse their inadequacies – the deeper meaning eludes them. Meanwhile, those inclined to look back fondly on the old Vacation may be pleased to enjoy the reminder. That it isn't any good doesn't matter. For that job, any new Vacation will do.

Film Review
Pixels is without wit, without jokes, with nothing to say but plenty to regurgitate
July 24, 2015 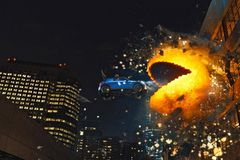 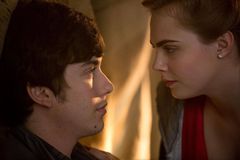 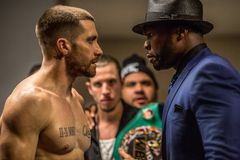