The genre has produced Clint Eastwood's Dirty Harry (five films), Charles Bronson's Death Wish (five films), Jodie Foster's The Brave One, the Wachowski brothers' V for Vendetta and Martin Scorsese's Taxi Driver. And what is Batman, after all (seven films since 1966, and still counting) but another variation on the vigilantism theme?

The revenge plot line was so compelling that Eastwood recently returned to it with Gran Torino (2008), playing a curmudgeonly war veteran who decides to cleanse his multicultural neighbourhood of its thugs.

Now, Sir Michael Caine, another colossus of the silver screen, has dressed himself in the stern garments of vigilantism.

In Harry Brown, which opened in cinemas yesterday, Caine is a retired Royal Marine residing in a run-down public housing project south of London. His wife is dying in hospital and Harry visits her regularly, trying to stay out of trouble and enjoy a pint at the nearest local. But again, a gang of drug-dealing yobs is wreaking mayhem on the community. When they murder Caine's old drinking buddy Leonard (David Bradley), Harry's slow fuse is finally and irreversibly lit.

Caine, in Toronto last September for the film's world premiere at the Toronto International Film Festival, said he didn't equivocate when he read the script by Gary Young. "I felt very strongly about the whole situation," he said during a day-long marathon of promotional interviews. "The film is a great warning, because nobody seems to be taking any notice of what's going on."

What's going on, in his judgment, is societal collapse, manifest in part by an explosion of crime and violence committed by drug-addled youths.

"And," he said, "it seems to be getting worse and worse."

Even though he's enormously successful, one of only two actors (the other is Jack Nicholson) who has been nominated for an Academy Award in five consecutive decades, Caine relates personally to the suburban wastelands in which youthful alienation flourishes. The son of a fish market porter, he was born - as Maurice Joseph Micklewhite - in southeast London, not far from the locations used in the film.

"The only glimmer of hope," he said, "is that they're tearing down those flats and building new ones, with £2-million being spent on it. But the drugs and violence are still there and are being swept under the carpet."

It was London producer Kris Thykier, a former public-relations executive, who hooked Caine into the project on the basis of the script. The 77-year-old actor, with almost 150 films on his résumé, has made it a habit to hand smaller, independent film projects to relatively unknown British directors. He did the same thing here, giving the Caine blessing to Daniel Barber, a director of award-winning TV commercials (for the likes of BMW, Estée Lauder and Sony), and of an Oscar-nominated 35-minute short film, The Tonto Woman (based on an Elmore Leonard short story).

Caine said it was viewing that film, a western, that convinced him Barber had the right stuff to direct Harry Brown - like High Noon on the council estates - "cuz it's like a western, isn't it, an urban western?"

Barber said he was intimidated meeting Caine for the first time, over fish and chips at Scott's in Mayfair. (Caine calls it the best place for seafood in London.) But he was even more nervous when shooting began. "'My God,' I thought, 'this is Sir Michael Caine. What am I doing here? I'm looking at a world icon and in one minute he's going to finish the scene and ask me what I think?'"

Off the set, Barber noticed how Caine's life was constantly interrupted by fans wanting autographs or photographs or just to say hello. "So I said to him, "Gosh, doesn't it drive you mad, people coming up to you at every street corner? And he said, 'What do you mean? Where would I be without them?'"

Caine already has another film in the can - Inception - a thriller starring Leonardo DiCaprio, Marion Cotillard and Ellen Page, due out this summer. And he's hoping to find financing for Cold War Requiem, in which he'd resurrect another screen icon named Harry - enterprising Cold War spy Harry Palmer. "We'll see if it gets made," he says. "Money isn't flowing like it used to."

In the meantime, living with his wife of 37 years Shakira Baksh in an apartment in London or at their country house in Surrey, he's enjoying spending time with his two grandchildren and finishing the sequel to his autobiography. And he has a novel in progress.

Still, film scripts don't land with the same regularity, Caine confesses. It's not that he'll ever stop making films. "You don't retire from the business," he says. "The business retires you." 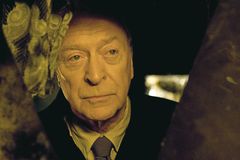