Scientist-broadcaster David Suzuki stands at a lectern before a capacity crowd, wearing an open-necked shirt with a native-Canadian design below the right shoulder.

The electric-guitar soundtrack that leads the camera across the Vancouver skyline and into the packed auditorium could easily be grist for those who view Suzuki as environmentalism's rock star and for those who would rather turn acclaim into personal attacks.

Indeed, the opening of Sturla Gunnarsson's documentary Force of Nature: The David Suzuki Movie has the potential to go awry, undermining the "Legacy Lecture" that Suzuki is about to give at the University of British Columbia's Chan Centre, his summation of his life in environmentalism.

But then his speech begins, unfurling through the film into possibly the most convincing and fascinating argument yet heard on every person's right to a clean Earth.

It's a speech easily on par with the greatest orations of the last 50 years. Suzuki, in his soft-spoken way, gently crescendos into wonderfully expansive ideas, such as the mathematical hypothesis by American astronomer Harlow Shapley that every man through the ages - from Jesus to Joan of Arc to you and me - ultimately breathes the same air, specifically atoms of argon gas, which our bodies don't store and which we release through our breath widely to all other living things.

"So, air is more than just a physical component of the biosphere. Air is a sacred element," Suzuki says with wonder. This is part of his argument that all living things are bound together by scientific laws and the elements, just as every particle since the Big Bang holds a minute pull on every other particle.

It's a scientific explanation for the physical force "that some people call love," Suzuki adds, in his calmly authoritative voice, "and that attraction is built into the very fabric of the cosmos."

Where the film excels is in the way Gunnarsson expertly injects scenes of Suzuki travelling to important locations in his life and allows him to tell his own story. Early on, he visits a memorial of an internment camp like the one his family and other Japanese-Canadians were sent to in the British Columbia interior during the Second World War.

The documentary then follows Suzuki to Leamington, Ont., where he developed his love of fishing and exploring swamps, at first due to the alienation he felt growing up as the only non-white kid in a small town. Another revelatory turn is the ethical crisis Suzuki had in his early scientific career, when he came to deplore applications of science that in so many ways destroy nature.

Continuing the theme of life's interconnectedness, Suzuki visits a memorial ceremony in Hiroshima, explaining that physical matter never actually disappears, even with the blast of an atomic bomb. Those who died from the bomb are not only still with us spiritually, their atoms are still in the water, in the air, on the land. It's an incredible thought.

Gunnarsson's trick is to let the narrative and ideas from the biographical segments flow into the speech and vice versa. He weaves these elements with such skill the film feels deceptively seamless. But the scenes never detract from the speech, which remains the focus of the film.

And as with all great speeches, this one is ultimately not just about the speaker, but the lasting power of the ideas he conveys.

Force of Nature opens Friday in Vancouver, Toronto and Montreal, and in more Canadian cities Oct. 15.

Jews and Baseball: a love story that could have been so much more
October 1, 2010 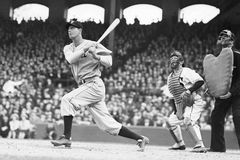