This film review was originally published on June 22, 1977.

It must be nice to be able to spend $8-million to fulfil your childhood fantasies. George Lucas has that much money because of the tremendous success of his last movie, American Graffiti, and he spent it both wisely and well on Star Wars, a science-fiction adventure that opens Friday at the Varsity and four other theatres.

Star Wars is the most entertaining sci-fi movie of the decade. After the various pretensions of Zardoz, Soylent Green, Westworld and Logan's Run, Star Wars is a refreshing return to the adventure of the days of Flash Gordon. In fact, it was Flash Gordon that inspired Lucas, as can clearly be seen from the introduction, printed in letters that scroll up into the infinite universe, to the ending which leaves as many questions unanswered as any typical Flash Gordon serial.

Star Wars is a feature movie that opens like Episode 6 of a serial, smack dab in the middle of a battle in deep space. Darth Vader, black-cloaked Dark Lord of the Sith, captures the rebel Princess Leia, played by Carrie Fisher, but not before she jettisons an escape pod from her spaceship that contains information vital to the rebel cause.

The pod contains two robots that are the comic creations of the year. R2-D2 is the short stubby member of this metal Laurel and Hardy team. He contains the information and talks in a language of beebles and gleeps that only his Laurel, a golden human-shaped robot called C-3P0 can understand. "Grotch, grinkle," says R2-D2. C-3P0 bops him on the "head" and warns him to watch his language.

The two robots are the most human members of the cast, thanks to director Lucas's screenplay. All the human beings talk like comic-book characters. Sometimes you can sense the balloons hanging in the air. The two robots have the richest relationship in the film, bickering like a long-married couple, getting each other out of jams. "Come back now," C-3P0 says at one point. "You wouldn't want my nights to get lonely."

There is, of course, constant danger that one or both of them won't make it back. Star Wars is an unrelenting series of adventures. The robots are captured by the Jawas, dwarf creatures with monks' hoods and beady red eyes who sell them to Luke Skywalker's uncle. Luke, a surrogate for Lucas himself, is played by Mark Hamill as a naive farm boy suddenly trapped in adventures of intergalactic intrigue.

He meets Alec Guiness, playing an old wizard called Ben Kenobi, who saves him from the Sand People, also known as the Tuscan Raiders. They hire a fast spaceship, captained by a cynical cowboy, played by Harrison Ford, who carries his blaster low on his hip, and head off to rescue the princess.

The battles, the duels, the special effects -- and what special effects! Swords made of light, blasters shooting laser beams, exploding planets -- it goes on and on. All the aging acid-heads who tripped out to Stanley Kubrick's overrated 2001: A Space Odyssey, will go bananas over Star Wars. Not to mention comic-book freaks, science fiction and fantasy fans, lovers of old westerns, romances, mysteries and movies about the Crusades. In addition to being a slickly produced and highly entertaining adventure suitable for the whole family, Star Wars is richly evocative of a whole range of old film forms and I predict that entire books will be written on the sources, the religious symbolism, the mythological and historical allusions, and so on and so forth that Lucas has incorporated into Star Wars.

Illustrators will notice the influence of Christopher Foss, whose S-F novel covers of mammoth spaceships covered with intricate detail have obviously inspired Lucas's set designers. Religious commentators will trace the parallels between Christianity and The Force, the religion that helps Luke Skywalker on his quest. Science-fiction fans will trace the influence of Douglas Trumbull on Lucas's special effects and robot designs. Trumbull worked on 2001 and directed Silent Running, featuring Bruce Dern and a cast of robots, but was specifically not hired by Lucas, who wanted total control of his designs and effects.

People will go on and on about it, but that's not what Lucas wants. The 32-year-old director claims he made the movie because that was what he liked to watch as a kid and nobody was making that sort of movie any more. He filled the picture with all the remembered elements of a childhood infatuation with Flash Gordon, but he intended nothing more than to entertain. Of course, he got more than he bargained for. With millions of dollars worth of special effects, he would have to outdo any of the low-budget originals that inspired him.

Usually the worst thing about successful movies is that they breed sequels, usually monstrous offspring that aren't a patch on their parents. Lucas has signed his stars to do two sequels and, for a change, I'm looking forward to seeing them. Even if they are only half as good as Star Wars, they will still be twice as good as most movies made these days.

The Force Awakens: Lukewarm Skywalker
December 16, 2015
Watch a Star Wars fan-film marathon: The Force is strong with these ones
December 14, 2015 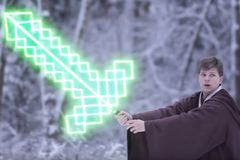 Star Wars and the meaning of life: Cathal Kelly on how the sci-fi series made him who he is today
December 11, 2015 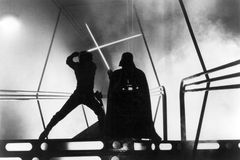