Geneviève Bujold still looks like, well, Geneviève Bujold. Sure, at 70, there are the expected wrinkles on the face and neck, the formerly chestnut hair is now long and grey and pulled back tightly into a ponytail. And it's no surprise to learn her two sons are, respectively, 44 and 32, and she's a grandmother. But the liquid brown eyes are as alert, the jawline as defined, the smile as winning and the mind as sharp as they were 30 or more years ago when Bujold was a Hollywood marquee player.

Not that the Montreal-born actress who has made Malibu her primary home for the past 39 years is concerned with aging, or has reams of reminiscences ready for the telling at the mention of Anne of the Thousand Days (for which she received a best-actress Oscar nomination in 1970), Coma, Tightrope, Dead Ringers or any of her other hits. "I prefer the now; I'm very much in the moment," she declared during the Toronto International Film Festival. Which is why, while writing is one of her passions, especially poetry, you'll never see un mémoire with her name on the cover near the cash register at Indigo. "That's an awful lot of time thinking about the past."

Unsurprisingly then, she's not too keen on interviews, the way they tend to poke about the past and prod the future. But she was making an exception for Still Mine, the latest feature from Canadian director/screenwriter Michael McGowan (Saint Ralph, Score: A Hockey Musical), which, after its world premiere at the 2012's TIFF and earning seven nominations at the Canadian Screen Awards, is having its cross-country commercial release this month.

"I really love the film," Bujold said. Moreover, since it was "a really happy shoot for all of us – no one was there just for the job, I promise you – I want to be part of what it was on the set, I want to see it through and promote, help and serve the film."

Made in 2011 near North Bay, Ont., and in St. Martins, N.B., Still Mine is based on the real-life love story of Irene Morrison (Bujold) and her husband of 61 years, Craig (James Cromwell). With Irene in failing health, Craig is faced with leaving the farmstead they've had for decades, or using his carpentry skills to build a new house better suited to her needs. He opts for the latter. But as construction proceeds, Craig, frugal, self-reliant, obstinate, runs afoul time and again with an equally obstinate provincial building inspector (Jonathan Potts), to the point that his labour of love is facing the bulldozer and Craig is facing a stint in jail.

At her age, with more than 70 films to her credit, Bujold tends to be quite choosy as to what screen projects she commits to. "I live very modestly," she noted – sans car, in a small, rented guest house, overlooking the ocean, in fact – "so I'm never obliged to go to work … I don't mind experiencing silence and doing nothing, y'know." With Still Mine, it was reading McGowan's script that whetted her appetite – "really, it was like a gift," she says – even though she knew nothing of the man or his previous work. She was quickly impressed, however, finding him "one of those directors who really knows what he wants. He gives you freedom but he's really navigating the boat, y'know, the keel is deep."

Bujold brought her characteristic intensity to the role of Irene, doing her own hair, eschewing makeup, wearing the same clothes and jewellery day after day, staying in character even after the cameras stopped rolling. "I like to be quiet especially when I work. I'm not going to be the one passing out cookies on the set," she laughed. "Not that my heart doesn't want to. It's just I like to be alone and focused all the time."

Looking over the Bujold oeuvre, one is struck by its variety. There's nothing that could be called "a typical Genevieve Bujold picture." Partly this has been the result of her own personality (anti-authoritarian, determined, independent), partly a philosophic inclination ("It'll come if it's supposed to come. I'll say yes if I'm supposed to say yes. I will know"), partly other people's intentions. For instance, she ended up playing Charlton Heston's mistress in the 1974 disaster flick Earthquake because, post-Anne of the Thousand Days, she rejected producer Hal Wallis's demand that her next big role be Mary Queen of Scots. "He said, 'You don't want to be the queen? Well then, you're gonna do Earthquake.' Which was fine."

In an interview with Time magazine 43 years ago, Bujold confessed "I love the camera. When it's not on me, I'm not quite alive." Does she still feel that way? "Well," she replied with a smile, "when I say I love the camera, it's because it's safe there. I get it. I used to say – but maybe it sounds pretentious, oui? -- it's like the eye of God. You can't fake it there. Not that I have to fake it anywhere, but I'm free in front of the camera … It's accepting and it really sees you. There's a stillness about it; it's just waiting to receive you, the camera film."

And, on the basis of her work in Still Mine, for which she received a best-actress nomination at the Canadian Screen Awards, we'll continue to be keen to receive her. When, of course, she chooses to do so.

Still Mine opens in theatres in Toronto and Vancouver Friday and in Montreal, Ottawa,, Halifax, Winnipeg, Calgary, Edmonton and Victoria May 10.

Film Review
Still Mine: Portrait of a man always true to his own code
May 3, 2013 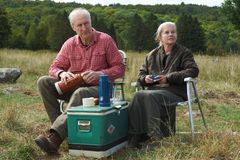 Who's in, who's out? The TV and film nominees for the Canadian Screen Awards
January 15, 2013 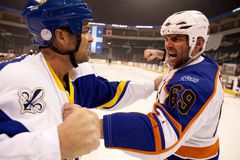 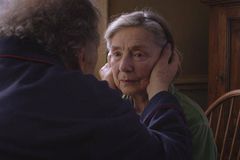