Everyone is busy, everyone is on deadline, yet somehow, in cities from London to Moscow, from New York to Jerusalem, audiences have found ways to line up around blocks to see – a piece of contemporary art?

The work, by Swiss-American artist Christian Marclay, is called  The Clock, a 24-hour loop of thousands of film and television clips, focusing on time, watches and clocks. What's exceptional about the experience is that the clips are arranged to run concurrently with real time. If it's 2:38 on a clock or watch on the screen, it's 2:38 in real life.

Considered as an investigation of cinematic time, a meditation on temporality or just one amazing technical stunt, The Clock, which debuted at London's White Cube gallery in 2010 and won Marclay the Golden Lion at last year's Venice Biennale, has earned critical kudos as well as popular acclaim (a favourite adjective to describe it is "addictive"). English novelist Zadie Smith, writing in The New York Review of Books, called it "sublime, maybe the greatest film you have ever seen...," except that it's actually a video installation, and you don't so much see it as live it.

On Thursday night, The Clock opens for the first time in Canada at the National Gallery of Canada in Ottawa, with a 24-hour screening at 5 p.m. There will be several more all-night viewing opportunities during the work's stay in Ottawa, which continues until March 25.

(There are only six copies of The Clock. To acquire one, for the first time in its history the National Gallery partnered with another institution on an acquisition. Two Toronto couples, Jay Smith and Laura Rapp, along with Carol and Morton Rapp, paid for the National Gallery's equity in the work, which has been jointly purchased with Boston's Museum of Fine Arts.)

On Sept. 21, The Clock comes to the Power Plant in Toronto, making its debut there with a special 48-hour screening to allow people to view the piece at any time of the day or night or in its entirety. It can then be viewed during regular gallery hours until Nov. 25.

The 57-year-old Marclay was raised in Switzerland and arrived at art school in New York in 1978 during the heyday of punk rock. Drawn to punk's energy, he began creating songs and soon became a pioneer of using turntables and vinyl as interactive musicalinstruments, before moving into sound-related sampling and video and sculpture. The Whitney Museum of American Art held a retrospective of his work in 2010, and, in 2011, Newsweek called him one of the top 10 contemporary artists in the world.

In person, when we meet in the National Gallery's foyer, he's tall and lean, with close-cropped hair, soft-spoken with a slight accent. He invites me to look at a few minutes of the work inside the gallery. The room, with three rows of five couches in front of the screen, is deliberately designed not to be like a movie theatre – Marclay has turned down requests to show The Clock at film festivals. The idea is that visitors can drop in, stay for a while in comfort and move on when they choose.

Between 2:30 and 3 p.m., we are at a wake in Ingmar Bergman's Fanny and Alexander, and Harold Lloyd is hanging from a clock face in Safety Last! (1923). Robert De Niro, in Raging Bull, upends a table, and Casey Siemaszko, in the cult 1987 high-school comedy Three O'Clock High, punches his locker a moment later. (While the clock rules, the calendar is irrelevant.) The segments are linked not just by the clocks in the clips but by sound, dialogue, pacing and music. Much of it is unexpectedly funny.

"Humour is there, you know," Marclay says. "It's really the material I use that dictates a certain kind of mood and the connections I can make between the footage. It's not just the clock ticking that's going to connect all these scenes. It's also something about the narrative."

Earlier Marclay works, such as Telephones (1995) and Crossfire (2007), also used sampled movie clips around a single theme. The idea of a clock-based work began with a previous project called Screenplay (2005), a silent video collage with live musicians playing along, using the video as a kind of score. That's when Marclay first wondered if it were possible to create a video showing clocks from the 1,440 minutes that make up a day.

When Marclay moved to London in 2007, he found himself without a workspace so he decided the clock project was something that could be done with just a desk and computer. It took almost three years to complete, with the help of six researchers, who found the clips (somewhere between 3,000 and 5,000 of them) by searching through DVDs, sometimes focusing on certain genres, such as westerns, or Italian films of the 1950s and 1960s.

"Now it's terrible," he says. "I can't watch a film without looking at clocks."

The minutes in The Clock don't all have equal weight. Hour marks represent small crescendos of activity, midnight, in particular, for dark deeds. At midnight, says Marclay, "every second you're using a different clock because there's so much material."

Other references to time's passage are more subtle: We see well-known faces – Michael Caine, John Cusack, Clint Eastwood – aging and growing young again in different moments. There are deaths and funerals and guttering candles. Marclay talks about The Clock as "a kind of big memento mori" – a genre of artwork, going back to antiquity, intended to remind us of our mortality.

"One beautiful kind of image in film is of people smoking . Actually they don't do it so much any more. It's not politically correct. That cigarette burning is the same as a candle in a 16th-century painting. It has that same power but it's a lot more contemporary."

What Marclay thinks makes  The Clock tick is that "these films are about life. What you are seeing is your own life. Why people are so much interested in the piece is because they become part of the piece. They know exactly how long they've been there and they worry about what they have to do next. Are they going to be late? Should they stay longer? Should they go? You walk in, and that moment is as good as any other moment and you decide how long you're going to stay.... They want to leave and they get caught up in it. It's that tension. It's how real life infiltrates the film." Donors buy stake in 'The Clock' on National Gallery's behalf
May 6, 2011
National Gallery acquires 'maybe the greatest film you have ever seen'
May 3, 2011 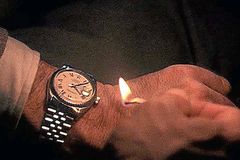