When the Bre-X scandal broke in 1997 and a massive gold find was revealed as a more massive fraud, mining executives predicted the true-life tale would be made into a movie, then joked about which actor should portray them on the big screen.

In one of my all-time favourite e-mails, the chairman at one of Canada's biggest mining companies, Norm Keevil at Teck, sent a tongue-in-cheek note to suggest he be played by Sean Connery. For the key role of Bre-X chief executive David Walsh, an affable mining promoter with an impressive beer gut, insiders tossed out the names of bumbling, rotund actors: John Goodman was a popular choice, so was George Wendt, best known as Norm from the TV show Cheers.

No one, and I mean no one, suggested an actor such as Matthew McConaughey for the starring role of Walsh. He's too sharp, too edgy. Which is the starting point for the disconcerting breakdown between what really happened at Bre-X and Gold, the big-budget movie based loosely on the scandal that opens wide on Friday.

Somewhere in the making of this movie, Gold became a McConaughey vehicle rather than a thriller about the fraud that played out in the jungles of Indonesia, on global stock markets and in the headlines.

By focusing on the actor at the expense of the story, the film ends up failing on two levels. Gold is far short of McConaughey's best work – I found him mesmerizing in Dallas Buyers Club but annoying here – and the rich tale of Bre-X is never fully mined.

(Full disclosure: In 1997, former Report on Business editor Douglas Goold and I wrote a book on Bre-X and subsequently sold the movie rights to a rival producer, then watched Gold win the race to tell the story on film.)

To their credit, McConaughey and Gold's producers/screenwriters – Patrick Massett and John Zinman of Lara Croft: Tomb Raider fame – retained several compelling elements of the Bre-X saga, namely, the rags-to-riches tale of Walsh, a down-on-his-luck stock promoter who decided to back an equally down-in-the-dumps geologist named John Felderhof, and finance an obscure mining play, based on an unproven geological theory. The film also captures the intrigue that swirled when corrupt Indonesian government officials and the world's largest mining companies circled Bre-X, looking to separate Walsh from his windfall.

I have no quibble with some of the latitude taken by the film. Changing the name of the company and its executives is a sensible legal precaution. And moving the company's head office from Calgary to Reno, makes the film more palatable to U.S. audiences without detracting from the tale.

However, the tight focus on McConaughey's Walsh stand-in, Kenny Wells, means the remarkable scale of the Bre-X story goes missing. What's lost in transition from reality to Hollywood is the rich cast of characters who crossed paths at Bre-X. Walsh, who passed away in 1998 at age 52, was something of a putz, never a criminal mastermind.

The film stays true to that character, but makes no attempt to dig into the mind and motivation of the alleged mastermind of the plot – a geologist played here by hunky Venezuelan actor Edgar Ramirez. Colourful mining tycoons such as Teck's Keevil who fought for control of the deposit, prior to the revelation that all that glitters is not gold, are summed up in the film in a single executive played by Canadian actor Bruce Greenwood, an unremarkable character given minimal screen time.

At Bre-X, investors were deceived by a handful of geologists in the Indonesian jungle – at one stage, they ground up wedding rings to salt samples of ore with gold, and later, they used flecks of the precious metal bought from locals, who panned it from jungle rivers. The movie is poorer for leaving out these players.

Instead, we get McConaughey chewing up the scenery. The actor went on a beer-and-burgers diet to build a gut that mimics Walsh's front porch; this vast expanse of belly gets enough screen time to warrant co-star credit.

So, too, does the actor's butt, often seen clad in your dad's white undershorts or bare in a trying-too-hard scene that has McConaughey climb off a bimbo and out of a hot tub to start nose-to-nose negotiations with a mining kingpin over his company's future.

Gold was released over the Christmas holiday in a handful of theatres to make the film eligible for this season's awards. It didn't score any nominations.

While Gold fails to take full advantage of a rich story, the film does manage to bring the tale to a more satisfying conclusion than the loose ends offered by real life.

The Bre-X scandal hurt thousands of investors and discredited the mining industry and Canadian stock market, yet no one was ever successfully prosecuted.

The final scenes of the film offer a cleaner conclusion. McConaughey's character learns that his partner, the geologist who found the gold deposit that wasn't, died after exiting a helicopter flying high above the jungle. That is what happened at Bre-X, and those close to the story still wonder what actually played out in the chopper. Without dropping a spoiler, Gold gives that final flight a delightful twist. But the movie cries out for less McConaughey, and a little Connery.

Oscar nominations: Judgment day comes to Hollywood
January 24, 2017
In the digital age, Canadians should be profiting from our best stories
Subscriber content
January 15, 2017
Where TIFF’s class of 2016 goes from here
September 15, 2016 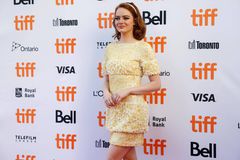