Montreal filmmaker Chloé Robichaud says she has modest dreams about her fourth trip to the Cannes Film Festival next month. "I certainly would like to meet Sofia Coppola. And Steven Spielberg, too, though I know they'll probably be very busy."

It's a sweet little bit of gee-whiz optimism from Robichaud, a baby-faced 25-year-old who just graduated from Concordia University's film school three years ago. She's already had three short films screen at Cannes, but this time around the pressure will really be on: Her first feature-length film, Sarah Would Rather Run (Sarah préfère la course) will screen as part of the prestigious Un Certain Regard program.

"I got a call from the festival a few days ago," Robichaud recalls, "but I didn't actually believe I got in until they made the official announcement and called my name. I have to be honest and say I cried a bit. When your name is that close to Sofia Coppola's name, it means something. Lost in Translation is a film that really changed me as a filmmaker. And the fact that she's a woman filmmaker, that means a lot too."

Robichaud's film is about a young woman named Sarah who wants nothing more than to be a competitive runner. Though she learns she could get in to a good athletic school, she simply doesn't have the money to go. But Sarah soon realizes that if she's married, grants and bursaries will be much easier to obtain. A marriage of convenience follows, but becomes complicated when it's clear her husband is far more invested in the relationship than Sarah.

Growing up just outside of Quebec City, Robichaud "always wanted to be a runner." She was inspired by film at a young age. "My father is an ad executive, so when they were filming ads I would go on the set with him. Even as a young girl I was eager to get my hands on a camera. When I was 13, a Quebec newspaper held a screenwriting contest for youth. I sent a treatment in for a girl who wanted to be a runner. I didn't win, but my treatment is what I based this film on."

Robichaud says her influences are broad and eclectic. "I love the work of Ingmar Bergman and Denys Arcand very much. I thought a lot about Woody Allen as I wrote this film. I think his influence probably comes through in the dialogue. I also love Wes Anderson."

She says that part of what gave her hope as she worked on her own projects was the burgeoning success of Quebec's film milieu. "It's very inspiring. I see how Quebec has done at the Oscars – three nominations in the past three years is impressive. I see work by people like Denis Villeneuve, Philippe Falardeau, and it gives me and others the sense that we can do it too."

Robichaud has already travelled extensively with her short films. Her most recent, Herd Leader (Chef de meute), screened at Cannes and the Toronto International Film Festival last year and was named as one of TIFF's top 10 short films of 2012. "A lot of Quebec short films are doing well at festivals right now. It's like a nouvelle vague. People really want to see Quebec films, both at home and abroad. I don't know if there's something in the water."

She concedes making a feature-length film "is a hugely different thing. My short films were always self-financed. Here we had a budget of $1.2-million. I just tried to think of it as shooting a short film, but at 20 days. It's the same in many ways, but obviously with greater production values."

Magali Simard, one of the TIFF programmers who chose Robichaud's Herd Leader, says she is "elated" at the news of her Cannes feature debut. "Last year, Chloé got a lot of notice at Cannes with her short film, and it was one of the most talked-about shorts when we screened it at TIFF. We were very impressed with what a confident filmmaker she is. Her film was quirky and had funny moments but was also quite sad and poignant at times. I think the Cannes programming committee probably took notice of her feature film in part due to the mark she left with her short films. This shows how important having a short film can be."

Sarah Would Rather Run is slated for a June release in Quebec by Seville Pictures. Their release strategy for the rest of Canada, including whether or not the film will bow at TIFF, has still not been determined. 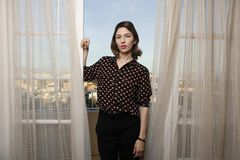