Guillermo del Toro, the director of Pan's Labyrinth and the Hellboy movies, has dedicated his life to making monsters. But they have never been as big as they are in Pacific Rim, a movie in which impossibly huge creatures from the sea battle with impossibly huge robots piloted by people whose nervous systems are synced up for battle.

Growing up in Mexico, del Toro was obsessed with monster movies. He was an avid subscriber to the hyper-geeky magazine Famous Monsters of Filmland, which he'd peruse every month for tips on how to make the impossible come to life. Now 48, del Toro was in Toronto recently to talk about his biggest movie ever.

It's hard not to watch this movie without a childlike wonder at its sheer size.

I wanted to make it a movie that if I go in with my kids they come out and they have a blast. My own creative life has been about a very strong dichotomy, which is that I either explore what I felt as a kid from an adult point of view or I actually create, in a very adult way, an audio-visual world about a very childish fascination. So my Hellboy movies or this are some of the most pure, un-ironic, un-postmodern movies you'll find.

So you've made a movie the little kid in you would want to see?

I think as human beings we are much more complex than sometimes we represent ourselves as storytellers. We try to give people what they expect from us and I'm not that way. I really just want to make movies that I'm happy with. If some people are puzzled sometimes, I just try to tell them, look: If you're going to take me seriously, take Pacific Rim as seriously as you would The Devil's Backbone. Because they are both a very, very telling part of me.

But it must have been challenging to keep a sense of wonder when you're working on this scale.

I thought it would be. Honestly, and for many, many years, I studiously avoided crossing the $100-million (U.S.) mark, because I thought it would come with a big fight for freedom, but when I met Legendary Pictures, Thomas Tull and Jon Jashni, and when I started working with Warners, I realized with great shock that they were actually supporting the same movie I was making.

Also, at 48, I'm really, really short-tempered when I disagree with something. The older I get, the more I understand old people. As in, no, he's not a curmudgeon, he's just really, really clear on what he doesn't like.

Is it challenging to preserve your own sense of amazement when you know what all the magic tricks are?

No, because you must remember I'm a Famous Monsters kid. So I grew up with a magnifying glass, looking at John (Planet of the Apes) Chambers's shelves to see what materials he used. I made up myself as a kid, I had a special-effects company, I had a stop-motion animation company, so I know how to cast, I know how to mould, I know how to sculpt, I know how to paint, I know how to draw. This is all second nature to me. If you ask me can you design the kaiju – sea monsters – right now, I could easily. When I'm talking to my effects supervisor, we're talking shop. It's second nature. So it never gets in the way.

How does making movies compare with writing fiction, which you've recently taken up with Chuck Hogan?

I never, ever had a more profound relationship with a creation as I've had writing The Strain novels [a trilogy] with Chuck Hogan. Ever. Never. I mean the level of involvement you have when you're writing fiction, you are basically God. You can kill characters that people love, you can preserve characters that people hate. You're in full command. There are no focus groups, there is no critic whispering in your ear. You're free.

Is that an important part of creation for you, playing God?

I'm blessed by irresponsibility I guess, or foolhardiness. Because somebody said, 'Okay, let me get this right: Your first published fiction work is a trilogy.' I go, 'You're right. You're right.' I didn't get published in The Atlantic Monthly. It is crazy, but I live the life where a lot of times I find myself wanting something and when it happens I don't realize how crazy it was to want it in the first instance. Like Pacific Rim.

Pacific Rim a beautiful departure from the din of summer’s other action flicks
July 11, 2013 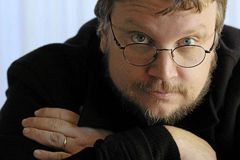