Arguably the world's most famous astronaut, Chris Hadfield is out-of-this-world eloquent about his experience as Canada's first space walker. But he also can play the man who fell to Earth. He'll crack jokes on late-night talk shows, strum a Bowie tune.

Or even take a turn as a film critic.

At a Q&A that followed the premiere of Gravity at the Toronto International Film Festival last September, an audience member recognized Hadfield and asked him about the accuracy of the film, which has since been nominated for 10 Academy Awards. As the retired space-station commander made his way to the stage to give his first public statement about the picture, director Alfonso Cuaron greeted him, saying off-mike to Hadfield, "Be nice."

Hadfield touted the movie's visuals that night – and the fetching possibility of galactic travel with Sandra Bullock. In other words, he was nice.

But some questions remain about the film's responsibility to that pedantic scold called science. Could Bullock really wear such tight little shorts in outer space without feeling a wee chill? Could all those space stations line up so neatly on one plane, like a row of commuter stops? Such questions have all the makings of one of those postmovie-date deconstructions that fall into a black hole.

In his first full discussion about the film, Hadfield told The Globe and Mail that, whatever its inaccuracies, Gravity 's unparalleled visuals and amusement-ride adrenalin are spot-on. "The movie just gives you a feeling of being out there better than anything else I know of," he said, haltingly, as though slowly reliving the experience. It was Gravity's sense of scale that won him over. "When you are out there, you are in between the world and the universe. You are not of the world. In fact, you have a sense that you and the world are going through the universe together."

In that assessment, Hadfield concurs with those fans of Gravity who argue that its technical virtuosity and atmospheric pyrotechnics about the doomed fictional Space Shuttle Explorer trump any geeky second-guessing. The movie is a fictitious thriller, they argue, not a NASA documentary or training manual. It's a gut-clenching, survival-in-space 3-D epic that depicts two astronauts left dangling in the cold ether, clinging to life by holding on to nothing but each other.

Cuaron himself has insisted he didn't want too much science to get in the way of plot. "That we have things that are not accurate? Of course – and actually, we know about them. And we chose to disregard those things, because we wanted first of all to honour the emotional journey of the film," he told Entertainment Weekly. In other words, we're in space, the final frontier – where basic science, disbelief and existential questions about William Shatner should be suspended.

Yet, after watching the film a second time and talking to Hadfield, it's been hard to suppress my inner Spock; and, frankly, to appreciate Gravity on the whole. "The storyline and the characters are extremely non-representative of reality," notes the Ace of Space. "They didn't even try to get an astronaut's character trait correct or the kind of person whom you would trust, or the training or level of skill that's involved. Or the seriousness with which you make it your career for decades."

Yes, fixating on certain issues, such as those tight shorts and the space-station hopping, is in fact being nitpicky: While those plot points may strain scientific believability, they don't get in the way of the drama. When, for instance, Dr. Ryan Stone (Bullock) cries, her tears should not have floated and twinkled toward the audience; in real life, they would have collected, like a jellyfish blob, under her eyes – but the fiction was way cooler. And when she peels off her helmet, her hair shouldn't whoosh around as if in a L'Oréal ad. "It should look like rat fur," says Hadfield.

At other times, though, the onscreen drama doesn't orbit anywhere close to reality – the reality not even of science, but of common sense. (Beware the debris of spoilers flying your way.) Setting aside the maudlin backdrop of Stone losing her child in a freak accident so that we can better empathize with her jittery city-slicker-in-space shtick, she is a bit of a freak accident herself. She trembles and whines, a tentative ball of mercury dressed up as an astronaut. "She had six months of training. Six months! And she's outside on a spacewalk? Really?" Hadfield wonders. Why didn't the screenwriters not just say 10 years, have her experiencing some kind of traumatic event, and make the movie more credible?

She would not have been on that space walk, either: Why would Stone, whom we're told is a medical engineer, be dispatched to fix some motherboard on the Hubble Telescope? Especially when she'd been complaining of nausea. While that's not an uncommon ailment out in space, how necessary was it that this sick person waddle out for a galactic IT call? In reality, Mission Control likely wouldn't have let her off the shuttle. "You don't," says Hadfield wryly, "want someone throwing up in a space suit."

The film's critical scene is the least convincing of the lot. In it, Stone is precariously dangling, by her toe, from a giant parachute strap, while hanging on to fellow astronaut Matt Kowalski, played by George Clooney. The strap is about to snap under the pressure of their combined weight, and, mercifully for her, Kowalski unsnaps himself. It's a testament to Bullock's Oscar-nominated performance that she leads us to believe that the pair would have tumbled right down to Earth had he not sacrificed himself.

In fact, in space, there are no such cliffhangers. "In weightlessness, you never dangle. By definition: You can't dangle without gravity," points out Hadfield. "Once there, you stop. There is nothing to keep pulling you. Where does the continued force come from that is pulling them against the strap? All you have is inertia."

For all that, and despite my own increasing hostility toward the film during this critical excursion with the astronaut, Hadfield is much more detached about Gravity. For him, in the end, compelling drama wins the day. "It doesn't need to be realistic," he concludes. "Spiderman doesn't need to be realistic nor does Nightmare on Elm Street. It's just entertainment. It's a movie designed to stretch all credibility, to be entertaining. And it is entertaining." If in need of a little more ground control.

The Oscar nominations: Our critics’ views of the nine best-picture contenders
May 11, 2018 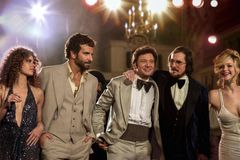 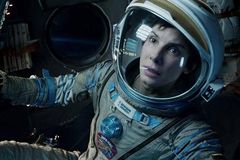 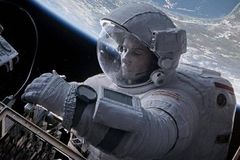