The outsized statue of St. Joseph lies strapped to a wooden pallet that is slowly being hoisted onto a truck. The saint has been stashed in a stone shed since 2011, awaiting restoration and reinstallation atop a roof peak at Montreal's Hôtel-Dieu hospital. One of the statue's keepers remarks that it's a good thing the wooden sculpture is clad in copper, because the century-old wood has rotted.

That scene appears early in The Last Breath: At the Heart of the Hôtel-Dieu de Montréal, Annabel Loyola's new documentary about the hospital that is as old as Montreal itself. The statue of St. Joseph serves as a potent metaphor for a place whose sturdy greystone exteriors mask its impending dissolution as one of the city's founding institutions.

Hôtel-Dieu was launched by Jeanne Mance, the French lay-woman who, in 1642, co-founded Montreal (then called Ville-Marie) as an evangelical community of faith. In 1659, Louis XIV transferred charge of the hospital to the cloistered Religieuses Hospitalières de Saint-Joseph (RHSJ), whose members still live in a wing of the complex at the foot of Mount Royal. The bodies of about 600 Sisters, and Jeanne Mance herself, are buried in the hospital's crypt.

Loyola's film is both a celebration of the hospital's long service, and a pre-emptive eulogy for its end. Hôtel-Dieu is one of several Montreal care centres whose functions are being absorbed into a pair of massive new teaching hospitals. The fate of Hôtel-Dieu has for the past two decades been in the hands of the Centre hospitalier de l'Université de Montréal (CHUM), which recently completed its new superhospital downtown.

Loyola worked as a volunteer at Hôtel-Dieu while filming there, and captured some remarkable scenes of care and commitment. We see a pair of surgeons who have operated together for 30 years, a young cystic fibrosis patient before and after her double-lung transplant and a roving harpist who draws tears to the eyes of a retired dance instructor with an impromptu performance of a tango.

Seething at the heart of the film is a question: How can Montrealers allow this historic institution, which Loyola calls "the soul" of the city, to fade away while the city celebrates its 375th anniversary? In that sense, The Last Breath is a feel-bad addendum to complaints raised by historians and heritage types, some of whom say that commemorations planned by a committee led by Just for Laughs founder Gilbert Rozon are too light on the city's history.

The film's impact might have been lessened had Loyola chosen to tell more of the story. She never alludes to the crumbling of the order that ran the hospital for more than 300 years. The RHSJ has closed four of its French apostolic sites since 2003, mainly because the nuns were too few or too old to continue. None of the Montreal sisters who appear on camera looks to be under the age of 70. As with the Grey Nuns, whose former convent is now a Concordia University student residence, the RHSJ is slowly dying out.

Also missing from the film is any serious mention of the extensive plans already in play for Hôtel-Dieu once its days as a hospital are over, some time in 2021. A year ago, Montreal Mayor Denis Coderre announced the city's intention to purchase the sprawling complex. He committed to protect the built heritage and redevelop the site in response to community needs, and also to respect "the spirit of the place" and the values of the RHSJ. He did not seem inclined to sacrifice the place on the altar of gentrification, as some had feared.

A large coalition of community groups and social agencies began to come together around Hôtel-Dieu four years ago, and last month produced a detailed report of what it would like to see at the site. The Projet de Communauté Hôtel-Dieu's $123.3-million plan calls for new social housing in the parking lots; retooled spaces for community groups and health services; green spaces and urban farming; and facilities for those emerging from homelessness.

All of that is very much in line with the social mission of Jeanne Mance. The main things left out are her missionary zeal for converting the heathen, and her aversion to large cities. Her dread of urban wickedness was one of the reasons she sailed for New France, and also helped the RHSJ decide in 1861 to abandon her original hospital site in Old Montreal. The sisters left the crowded industrial city and rebuilt their hospital on farmland near the mountain.

The present container for what Loyola calls "the soul" of Montreal was deliberately built at the city's edge. Its expansion into the current complex of buildings was mainly a work of the Victorian era, not the Montreal of Louis XIV.

Ironically, the new CHUM superhospital is much closer to where Mance's first hospital stood. It seems likely that if a camera crew prowled the halls and rooms of the new facility, it would find scenes of care and empathy similar to those filmed by Loyola at Hôtel-Dieu. The best part of Mance's legacy is far from fading away.

The French-language version of The Last Breath: At the Heart of the Hôtel-Dieu de Montréal plays at the Cinémathèque Québécoise April 24 and 25; in the presence of filmmaker Annabel Loyola on April 27. 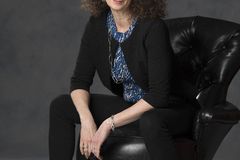 Until the Lions offers intimate dance version of epic poem
March 20, 2017
Follow Robert Everett-Green on Twitter @RobertEG_
Report an error Editorial code of conduct
Due to technical reasons, we have temporarily removed commenting from our articles. We hope to have this fixed soon. Thank you for your patience. If you are looking to give feedback on our new site, please send it along to feedback@globeandmail.com. If you want to write a letter to the editor, please forward to letters@globeandmail.com.
Comments