It's two weeks before the new Ghostbusters is released – two weeks of industry hand-wringing, 3-D touch-ups, wax-figurine unveilings, virtual reality walk-throughs and endless whinging from Internet trolls concerned that their childhood is being zapped to a Hell dimension – and Ivan Reitman is quietly enjoying a buffalo mozzarella, tomato and basil pizza in a corner booth of Toronto's Montecito, the restaurant that Zuul built.

For children of the '80s, Ghostbusters is an adolescent touchstone. For Hollywood, it's a case study in how to fuse two disparate genres. For Reitman, it's a cash cow.

Although rumours have been circulating of a new Ghostbusters film ever since the original foursome saved New York from a haunted painting back in 1989, the director of the original series has mostly been cool to the idea – and due to rights issues, there could be no ghostbustin' without unanimous approval from himself, Dan Aykroyd, Bill Murray and Harold Ramis.

So, although there was a brief flurry of activity in the late aughts before Ramis died (including one version that took place in "Manhellton"), Reitman has mostly been content to let things stay crystallized in time and pink slime for the past 27 years.

But then Sony, which released the first two Ghostbusters back when it was called Columbia Pictures, birthed a series of flops and found its franchise possibilities wanting. Who, ahem, was the studio gonna call?

"I talked to my colleagues, my fellow owners, and said, 'Look, we're not going to do any more of these ourselves – we should find a way to work something out with Sony where we get taken care of forever, and our children get taken care of forever, and let [the studio] be free to find ways of doing something with this wonderful brand,'" Reitman says between pizza slices. "That went smoothly, believe it or not. And that's what led to Ghost Corps."

Ghost Corps might sound like a joke – well, perhaps not much more than "Ghostbusters" – but Reitman's production company just changed Sony's sagging fortunes and introduced a new power player in Hollywood's franchise arms race. At the very least, it promises more iterations of Ghostbusters than even the most Ecto-Cooler-addicted kid could have imagined. Oh, and it will, of course, make the Toronto-bred Reitman – whose family donated the land for the TIFF Bell Lightbox – an even wealthier man.

"The Paul Feig movie is kind of the first thing out of the box," says the 69-year-old, who took a producing back seat on the new film, with director Feig and co-writer Katie Dippold managing the creative aspects. "Last week, we announced Ecto Force, which will be an animated television series that takes place in the future, with Ghostbuster teams all over the world. And there are lots of goodies still to come."

For even the most casual industry observer, it's clear that Ghost Corps is aiming to become the new Marvel Studios, with its very own ever-expanding canon ready to launch spinoffs and sequels, reboots and retcons – though Reitman is wary of the much-used "cinematic universe" label.

"I hate using those terms – it diminishes what we're going to end up doing," he says. "But we're hoping we can make sense of these two parallel movies [the original series and the Feig reboot] – we have an idea for it, we're working on it."

What Reitman is definitely not working on, though, is a male-led Ghostbusters reboot to compliment Feig's Melissa McCarthy-starring film. When Ghost Corps launched last March, trade publications reported that a Channing Tatum/Chris Pratt Ghostbusters was also in the works from the Russo brothers (Captain America: Civil War) – which immediately led critics to wonder if Sony had already lost confidence in its female-centric version.

"I was never involved in that, it was never real," says Reitman, who's stayed quiet during all the years of varied speculation and development. "There was a writer hired by the studio who did 30 pages, and it wasn't very good … The biggest misconception was that we were creating a parallel film in case the girls version didn't work out. But the only movie we were making was Paul's movie. It never faltered."

Reitman is also quick to play down accusations of gender bias among a certain core of original Ghostbusters fans, some of whom have mounted impressively toxic Internet campaigns against the new film.

"I don't think it was that. I think it was mostly focused on, well, men who were the ones to take it up – these are guys in their forties who were seven to 10 years old when the first movie came out, and it was more an attribute to the power of the first movie, in which it was a seminal film for them, for whatever reason," says Reitman. "So just the idea that there was going to be another Ghostbusters, male or female, made a lot of guys of a certain moment in their time nervous."

One hurdle that Reitman won't deny is the difficulty in getting Bill Murray back onboard. The actor has long complained about the sequel, and is notoriously difficult to wrangle if your name isn't Wes Anderson. "It's all absolutely true. It's a famous story that Bill didn't show up until a day before on Meatballs. I didn't have him for Stripes until just two weeks before we started shooting. On a personal basis we have always been really close, but I knew not to bring [another Ghostbusters] up," Reitman says.

After the tepid reception of Ghostbusters II, Reitman adds, Murray's "head was in a different place. It was this period where he went to France, where he was discovering who he was as an actor, and he had the right to do so. The fact was we all had the right to be unreasonable in our own way. Which is the reason another one didn't get made for 25 years. That's the true story of it."

Yet somehow – and this is where adding a spoiler alert is only polite – Murray acquiesced for Feig's version. "Well, it's a secondary part, only a few days of shooting," says Reitman, "and Bill loves, loves the women."

Women who, Reitman adds, should be getting their own Ghostbusters sequel, too – if everything goes according to Sony and Ghost Corps's long-term plan. "Paul came to this with Kristen [Wiig] and Melissa in mind, two of the funniest women – no – people, in the world, and created something that's great fun. It's a film that families will see together, and just like ours did, will work for adults on one level and kids on another," Reitman says. "I think there's a search for that, for audiences who have returned from that grungy darkness of what's become the current, most popular way of doing big films, comic book films … I think this time, we're the freshest thing out there."

Whether that freshness can or should last for years to come is a question that doesn't seem to concern the interested parties, at least not yet. Already, Reitman's fellow producer Amy Pascal has called the franchise possibilities "endless – people are going to love this movie so much that they're going to demand more and more."

In the meantime, Reitman can rest easy knowing that the Ghostbusters legacy – whatever it will become – remains in good hands: his own. In fact, the filmmaker seems so relaxed that, despite all the online vitriol and industry crowing, there remains only one question on his mind, at two weeks from release: "So … did you like the pizza?" 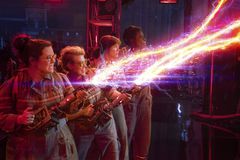 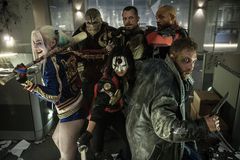 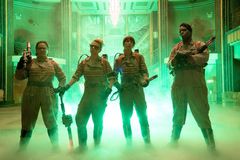