Gone is any trace of the pudgy, human punching bag known as Neville Longbottom. The 21-year-old British actor Matthew Lewis, who plays the hapless Longbottom in the Harry Potter films, has shed all the baby fat and awkwardness that led his classmates at Hogwarts to pick on him mercilessly over the years. Now lean and lanky, Lewis has grown into a confident young man ideally suited to play the unlikely hero in the final Harry Potter. As the film hits theatres today, Lewis reflects back on a decade-long journey that saw a bunch of prepubescent, unknown kids catapulted to worldwide fame as the stars of one of the highest-grossing film franchises of all time.

You grew from a boy into a young man the past decade, making the eight Harry Potter films. Was it ever a challenge living with the same group of people through these highly hormonal, formative years?

A lot of times people say, "Oh, you must have missed out on your childhood." But it was very much just like going to school, to be honest. We'd come off set, and go into the classroom to do English, math and science. There was a huge cast of kids - including Dan (Daniel Radcliffe), Rup (Rupert Grint), Emma (Watson), Tom (Felton), the twins James and Oliver (Phelps) - and we were all in the same boat from the beginning. So I had the exact same childhood I would have had, but it happened at Hogwarts.

Who were you closest to?

So many of them. Alfie Enoch, who played Dean Thomas, was a good friend of mine, and it was very unusual because we came from very different backgrounds. I'm from the north of England. I went to a regular school, and my parents are not particularly wealthy. Alfie went to Westminster in London and to Oxford University. He talks very posh, and I don't. So we're different, and yet we had so much in common. Dan (Radcliffe) and I figured out early that we had the same sense of humour. I'll never forget when me, Dan, Rupert and (producer) David Heyman were on the first film. We went to the WWF (World Wrestling Federation) in Sheffield, and we all went to McDonald's before the fight. It was really the calm before the storm, and I don't think that Rupert and Dan could sit in McDonald's together any more. But back then, no one bothered us. I have pictures from it. I'll never forget that night.

Were you surprised when it came out last week that Radcliffe admitted in the press to a drinking problem, due to the pressures of Harry Potter?

I think it's something that's really been blown out of proportion. Not to say he was misquoted, but I think it's been totally taken out of context. I don't think it was the pressure of Harry Potter. If you're young, growing up in the U.K., you go out for drinks. It's a common thing. But I've known Dan for a long, long time. He's one of my best friends, and I've been out with him lots of times, and I've never seen any destructive behaviour. So was it a surprise? Yes, because I think there are newspapers in Britain - one in particular, that I won't name - and it's what they like to do. They like to find the bad in everything. The thing with Harry Potter - because we're all such good friends, and no one has really gone off the rails, and it's nearly over - I think they were just trying to find something derogatory. And it's a shame they picked on Dan because it detracts from the hard work he's put in over the last 11 years.

Does it feel like the right time to say goodbye to Harry Potter?

People will say are you sad to say goodbye? Obviously, there's a degree of sadness. But I think if you'd asked me two years ago, I would have said I was clinging onto (director) David Yates's leg, saying "Don't let me go." But now, having done theatre for the past six months, and I really found my feet and loved every minute of it, I'm excited for the future. I don't know what's next, and that's frightening, but it's a good frightening. It's exciting.

Lord Voldemort scares the bejesus out of me. Did he scare you too?

He is terrifying. Frightening. I mean Ralph Fiennes, when he's not Voldemort, is pretty scary. He's quite intense. David Yates likes to try and get things in the first few takes because he believes they are the freshest, so we tend to do very little rehearsing. There's a scene in this movie where Neville confronts Voldemort in the courtyard. We did a quick block on the shot, and a quick run-through of the lines in our clothes. Ralph had hair. He had a nose. I don't know whether he meant to do this or not but he just stared at me. He never took his eyes off me, and I felt that he was boring into my very soul. But it worked. We came out onto the set, and everybody else just melted away, and it was just me and Ralph. I have no idea if it is any good, but I loved every minute of making it.

Your character has a particularly interesting story arc. Did you like how J.K. Rowling crafted Neville to evolve from the clumsy Nervous Nellie to the young man destined to lead?

I had a splendid time playing Neville Longbottom, and what Jo (Rowling) did with him is just so lovely. What a journey he takes, from this shy, bumbling child who is bullied and scared of his own shadow, to become this hero. Neville has always had these amazing qualities, but he's never really shown them off before. School can be a lousy time for a lot of people because, when you're growing up, confidence is not something that sits really high, and people get bullied. Yet Neville shows that doesn't have to be the be-all and end-all. Kindness and loyalty to friends does matter. You can grow up to be what you want to be. You can be a hero. I feel very honoured to have been allowed to play him for so many years because Neville really is an inspirational character. 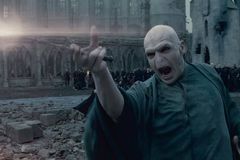 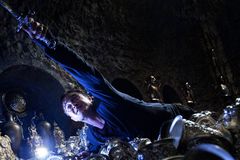 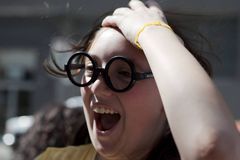