Canadian funny man Seth Rogen has carved out a lucrative, high-profile Hollywood career by finding humour in the absurdities of everyday life.

So it made perfect sense to the 29-year-old Rogen to help his friend Will Reiser cope with a cancer diagnosis – for which he'd been given a 50/50 chance of survival – by cracking perversely funny jokes about Reiser's surreal and dire situation.

After countless rounds of chemo, Reiser was eventually given a clean bill of health. And Rogen and his long-time writing partner Evan Goldberg ( Superbad, Pineapple Express) urged their pal to write his cancer experience. The end result is a critically acclaimed cancer comedy, aptly titled 50/50, which was shot in Rogen's hometown of Vancouver and opened in theatres on Friday.

Did you ever worry that you'd crossed the line, or did Reiser ever take offence to the ribbing he took from you and your friends?

Before we knew Will had cancer, he was just kind of sick all the time, and we mocked him incessantly because he was always diagnosing himself. For a while, he thought he was diabetic, and another time his mother told him to eat nothing but salt. I remember being with Will and another friend at the farmers' market, and Will was complaining, again, about feeling sick while dumping piles of salt on his food. Needless to say, we had great fun at his expense, and he got so mad that he walked home. We thought he'd just gone to the bathroom and, 20 minutes later, we were like I don't think he's coming back.

In 50/50 you basically play yourself as Kyle, the obnoxious but loyal best friend of Reiser. Did you tap into your own personal experience of dealing with a friend with cancer?

Definitely. We wanted to really represent how me, and all of Will's friends at the time, just really didn't know how to behave. Our way to best deal with it was: We won't ignore it [cancer] but we will not treat it seriously. In fact, we will aggressively make light of it. And that's the approach we took, which probably was not the most sensitive approach, but it led to a lot of funny situations.

How did you and your Vancouver-born buddy Goldberg get involved as co-producers?

It all started in 2004 when me and Evan were writers for Da Ali G Show, and Will was a producer. We met and became friends, and right after the show ended, he found out he had a tumour on his spine. For the next four months, he got tested by different doctors, was misdiagnosed and was bounced around. We were all in our early 20s, and none of us knew what was going to happen until he finally got surgery and got better. After Will started to recover, we couldn't ignore a few things – we couldn't ignore that he was a kind of neurotic, somewhat annoying guy before he got sick. And then after he got better, he was much more laid back and easier to be around. So his illness – and all that went with it – became the loose structure of the movie.

Why did you encourage Will to write this screenplay?

We just had never seen any movie about cancer that tonally represented what we went through. We couldn't ignore that it was really sad – and scary obviously – but really funny and absurd things kept happening probably because of how young and stupid we were. It took Will a little while to finally write the script – probably a year or so – but when he did it turned out to be really great.

Originally, Scottish actor James McAvoy was cast as the lead. How did Joseph Gordon-Levitt end up in the part?

James had to leave for a family emergency one week before we were to start shooting. Joe literally had a few days to prepare for the role, which was very brave of him as an actor. But Joe is one of the nicest, coolest, most confident and articulate people I've ever met, which is the exact opposite of the character he plays in the movie. And the fact that he was able to make such a transformation, with so little preparation, was mind-blowing to witness.

Can you rhyme off a few scenes in the film that were ripped verbatim from real life?

We did go to bars when he was sick, and we'd talk to girls, and the subject of his cancer would come up. But we didn't take him to the bars to get him laid, like it happens in the film. But there is a scene where I'm changing the dressing on his wound, and I'm almost sick. That is absolutely how it went down. I was literally gagging. 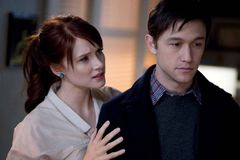